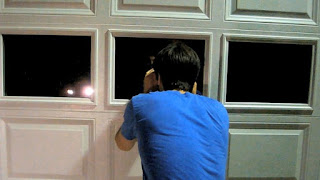 Catfish might be the best one time watch you'll ever see. It pulls you in, is engaging, funny, definitely odd and at times almost unbearably suspenseful. The only problem is, once you get to the end and things are revealed and everything's all tied up, there's really no reason to watch it again. This is a movie that works and entertains by making you feel like you have to know what happens next. Once you know, what's the point of visiting it again?
The plot is simple enough. A guy engages in a relationship with a family, more intimately with one of the girls in the family, who he is falling for. Their relationship exits mainly on Facebook and their cell phones. Later he decides to take a trip to her home in Michigan to surprise her with a visit. It's not ruining anything to say there's a surprise ending, and while I won't reveal what that ending is, I will say that considering all the hype about everyone bending over backwards to keep the big twist a secret, it is pretty anticlimactic. There was definitely a feeling of 'that's it?' that came with it. It is pretty crazy though in some ways and more than a little sad.
It's interesting that both this and The Social Network came out in the same year. They actually go hand in hand in a very linear way. Where The Social Network shows the birth of a certain kind of virtual communication and interconnectivity between people, Catfish shows how people can take that tool and do amazing and sometimes unhealthy things with it.
Questions to the validity of this documentary have popped up here and there, with some thinking it's all staged and a big hoax. I don't think it is, but if it was, it would divorce it from its relational relevance to The Social Network and wed it instead to that other docu-hoax film from this year, I'm Still Here. And that would render it pretty much completely pointless. But there's always going to be people who exist only to stir up the pot, wearing their cynicism like a badge of pride (and ignorance). So come to your own conclusions, but know that I and most others have no reason to think this is anything but sincere non fiction.

Catfish isn't a story that needs to be told. It isn't one of the best films of the year and it isn't groundbreaking cinema or showing you a slice of life that will change your own.
What it is is a fantastically entertaining and engaging true story with an ending that will no doubt bewilder in some ways, but also leave you wondering what all the fuss was about.