V is for violence 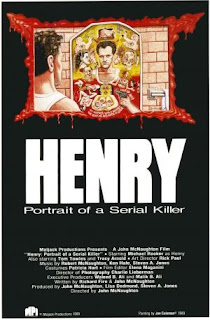 There are really two kinds of movie violence. There's the almost cartoonish, gory gouging, slicing and dicing of 'torture porn' movies like the Hostels and the Saw franchise, and then there's the low budget realistic violence like the kind found in Henry: Portrait of a Serial Killer. Henrys shoestring budget, grainy look and honest performances give it a sense of realism that very much adds to its very disturbing subject matter.
Based on the murderous exploits of famed killer Henry Lee Lucas, Henry pulls no punches in depicting the terror in his random and brutal attacks on people. The film was shot in Chicago, but this isn't a Chicago you'll find in travel brochures or in the opening credits of Oprah. This Chicago is gritty, scary, dirty and dark. As is the story. This movie takes an emotional toll on you. And the realistic nature of the look, disturbing images and violence make the stomach turn.
Michael Rooker is great as Henry. I think this was his first film role and it's a role he seems he was born to play.
This is a horror movie, but I didn't really find it as scary as I did unsettling. And it's not as technically impressive or as engaging as serial killer movies that came after it like Silence of the Lambs, Se7en or Zodiac. The thing this has going for it that Silence of the Lambs and Se7en didn't is that it's based on a real person. A person convicted of 11 murders and claiming to have killed over 600 people. And that makes this a monster movie in the truest sense of the word.
Henry was a critical success at the time of its release and its disturbing nature and realistic violence had more than a few people running, running for the exit when it was shown at theatres. But what it's more infamous for is that it took about four years for it to be released after it was made. The MPAA wouldn't give it a lower rating than an X for its violence, which at that time basically meant it could only be shown in porno theatres, despite it not even having any sex in it. After the X rating was abolished in 1990, Henry finally got a chance at a wide release with a couple minutes of cuts done to some of the more violent scenes. In 2003 or something the full uncut version was finally released on DVD for the first time to public and that's the version I saw. I don't know if the edited version is easier to take than the uncut one because I didn't see the edited version. But the uncut one is no picnic. I wouldn't suggest watching this if you have a hard time with graphic violence or realistic depictions of murder, because this can almost feel like a snuff film at times. But it's also an excellent study of madness and serial murder and a very effective watch with some great acting and a well chosen, ballsy ending. Just don't throw it on on family dinner night.