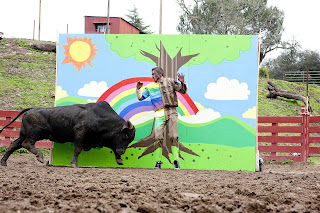 And so goes the Jackass 3D....experience? Yeah, I guess that's the best way to put it. You get the feeling watching it that these guys want you to puke on the guy in front of you in the theatre, and that just the thought of that as a possibility is enough to send them all to bed at night with a smile on their faces. But how to make a moviegoer recycle that buttery popcorn before it has a chance to hit the tubes? With blood and gore? Nah, the Saw and Hostel movies have desensitized audiences beyond the point where a little mutilation is going to get many goats. How about childbirth? A live actioner of the miracle of life from the first person view of the delivering doctor? Nah, too classy. Oh I know! Let's get our ridiculously obese friend Preston to slap on a full body suit of saran wrap and do some heavy cardio till he emits and a cup full of sweat and then get Steve-O to drink it and puke. Retch. Yeah!
The Jackass crew have never been ones who were afraid of scraping the bottom of the barrel and though they haven't said it outright, you get the feeling this third movie based on the 'let's hurt ourselves and puke and stuff cause it's funny' TV show is meant to be the show stopper. It seems the general consensus during the making of this movie was bigger, bigger, bigger. Which in Jackass roughly translates to grosser, more dangerous and, truth be told, funnier. I mean, you know there's going to be things that just...wrong, when you get ID'd like three times before you even get into the theatre. It'd be easier to sneak into a strip club than Jackass 3D.
By now you know if you're a Jackass fan or not and I'm guessing about 99% of the people that go to see this know they're going to get a kick out of it. The rest won't bother because they know it's not for them. As for me, I'm kind of on the fence. I'll watch it if it's on, see the movies if a buddy invites me along, but I don't own any of the DVD's or see much point in watching them more than once. After seeing Jackass 3D, I'm still planted firmly on that fence. I laughed. I laughed my ass off, lots. People hurting themselves is funny. Let's face it. I'm a huge three stooges fan and this is basically just tasteless slapstick. And when I wasn't laughing? You guessed it. Retch. Gag. Retch. And when I wasn't holding back my Wendy's, I was uncomfortable. One of the ways the Jackasses upped the ante in this volume was taking things from 'all in fun and games' to mean and unfunny. There are segments, like one where Johnny Knoxville dresses up as an old man and pretends to make out with his granddaughter in public, or another where the guys thought it'd be funny to throw Bam Margera, who is deathly afraid of snakes, into a pit of live snakes, which had the whole theatre in an awkward silence. 'Hey Bam, remember when you almost literally had a heart attack and your worst fears were realized and we all just stood around and laughed at you? Good times fun times.'

So should you see Jackass 3D? Hey don't ask me, like I said, you know by now if you're into this kind of stuff or not. Yeah things are a little grosser, a little more dangerous and a lot more tasteless, but it's nothing you can't handle. I mean come on, who hasn't had a cup of obesity sweat every now and then? Or been launched into the air in a porta-potty full of diarrhea? Anyone? Anyone?