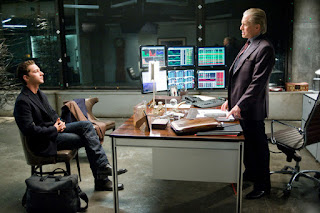 There are sequels that borrow a title and characters from a movie, but have nothing to do with it in plot, feel and even style. And there are sequels that are direct sequels. Constantly referencing things that happened in the first movie, a plot similar, but not duplicative, of the first, even brief cameo's from original cast members. That's a sequel. This is one of those. This is a sequel. Money Never Sleeps even feels and plays like the original Wall Street, with the obvious exception of the world having evolved in the last twenty years.
Cell phones are smaller, the stock exchange is less about 'the floor' and more about computers, cars and bikes are nicer and bank accounts and the money being made is much, much bigger. You know you're in a world you have nothing in common with when guys lose a few million bucks and shrug it off as little more than an annoyance.
But the world of Wall Street isn't the only thing that's changed. So too, has our hero(?), Gordon Gekko. The first scene of the film is his release from almost a decade behind bars, and he seems to emerge less of the titan he was in the first film, and more...human. Gordon Gekko, it seems, is a changed man. Isn't he? I won't spoil anything or delve too deeply into Gekko's character, but I will say that all throughout the film, he had me wondering to myself whether this is actually what he has become, or if he's putting on an act in favour of some hidden agenda?

Joining Douglas' Gekko this time around is his daughter, played by Carey Mulligan, a talented actress whose facial expressions and body language really bugged me throughout the film. Sorry, but they did. And Shia LaBeouf, as the young broker whose planning to marry Gekko's daughter, and strikes up a friendship of sorts with Gekko behind her back as she, understandably, wants nothing to do with him.
LaBeouf's a really good actor and holds his own in head to head scenes with Douglas, Josh Brolin, who excellently plays a greedy billionaire, and one of my favourite actors, Frank Langella, who plays to perfection Shia's mentor in the film and, typically, gives the best performance of the whole production. Susan Sarandon also has a small and somewhat pointless role as Shia's mother, whose a bad real estate broker and is constantly hitting her son up for hundreds of thousands to hang onto properties that are always losing money.
In short it's probably one of the better ensemble casts of the year, with not one bad performance among them. A surprise guest also makes an appearance as well, and while I won't name any names, his initials are Charlie Sheen, returning briefly as Bud Fox to bump into Michael Douglas and have a quick chat about where his life has gone since they last met. It's fairly inconsequential to the rest of the plot, but it's a great scene, one that I, and any fan of the first, will get a kick out of.

There's a lot going on in Money Never Sleeps, this time around the film takes place in 2008 and focuses as much on the economic collapse of that year as it does on the stock market, also making the film a relevant document from a particular point of view in America of the financial crisis at that time. There is a lot of stock market dialogue mumbo jumbo that I don't even pretend to understand, but I think the film knows that most of us won't understand that part of it, and doesn't care because, really, it has nothing to do with the actual story arch and so we don't feel like we're being left behind. Oliver Stone handles all the elements of the story well and with the exception of what I just mentioned, presents them in a way that enables us to keep up with things and remain engaged and entertained throughout.

And speaking of Stone, I read that he originally wasn't going to direct this movie and only when the American economy collapsed did he change his mind, and thank God he did! Stone is one of my favourite directors and this film is a perfect example of why. He knows just how to strike the right balance between flashy, interesting and impressive camera work and shots, and letting the camera sit back and observe so as not to distract from the story. He uses a lot of the same split screen type stuff he used in the first movie, maybe a little more polished this time around, and that again reminds us, in case we forgot, that we are watching Wall Street's sequel. I love every second of the directing in this film.

Money Never Sleeps has for the most part been getting pretty average reviews, the general consensus seemingly that the movie is good, but not great, and certainly not meeting the bar that was set by the first. A lot of the complaints seem to centre on a feeling that the movie was undone by a poor final third. I didn't think so. The last part of the movie was great. Well, great up until the final scene, which rivals Spielberg's War of the Worlds as most disappointing movie cop out ever, lacking both common sense and originality. There was also a plot point earlier in the film concerning a sum of one hundred million dollars that felt very contrived and obvious, you'll know what I mean if you see the film. But other than that the film was pretty much great through and through.
No, not as good as the first, but a worthy little brother and a fine and true sequel in every sense of the word. Besides, which sequel, besides The Godfather Part II, Terminator 2 and Magnum Force (Dirty Harry 2), ever has been better than its predecessor? And so the arguments begin.