Why not to f**k with Ouija boards 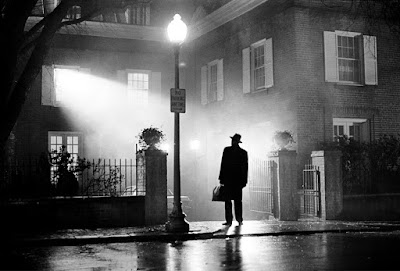 Is The Exorcist scary because it's scary, or because Warner Bros., the studio that released it, keeps telling us over and over that it's 'the scariest movie of all time?' Well, like any film dubbed 'horror,' what's scary to one might not be to another. I think it's impossible to name any one movie the 'scariest of all time' because there's so many varying opinions of just what is scary in film that it would ultimately be a pointless argument. But movie studios know how to market their films. Warner Bros. has been doing it since 1903. That's 117 years of telling people what they want to see, nay, what they have to see, and why. So by 1973 they had gotten pretty good at it. Then the movie came out and almost instantly became one of the most profitable movies of all time. Then stories of people fainting, vomiting, going into convulsions, having miscarriages and running, running for the exits at screenings of the film around the world. I can just see the back patting, hand shaking and big fat cigar lighting going on at the Warner Bros. studios head offices when those stories came down the pike.
So what does all this mean? How is this relevant to the modern day movie watcher who pops The Exorcist into their respective movie projection device? It means you go into this movie like I did the first time I saw it; with the expectation to be scared out of your wits. With an elevated heart rate. If you're a believer, as I am, you might wonder if by simply watching this movie at all, you're committing some kind of sin. I mean, who can forget the now infamous proclamation by Mr. Billy Graham after viewing it that the film itself was pure evil and the devil's handiwork?
So does the film deliver on its promise of pure terror? In a word, yes. The first time I saw it, I was 16 or 17 and it scared the crap out of me. Some of the images stayed with me and disturbed me until just this week, when I decided to give it another go and see if it had the same effect on me a decade later. I can't say I was as scared this time as I was when I was younger, (in researching some backstory on the film recently I came across an article that said according to a poll that was taken, the film is most disturbing and scary to teenagers between the ages of 15 and 17. Weird) but it still has a powerful force in it to move and shake me at times. I'm not talking about any kind of spiritual force, and I don't agree with Billy that the film itself is evil or from the devil, I'm talking about the force that all exceedingly well made films have. That magic that plugs into our emotions and dictates the way we will feel for the next 120 minutes or so. It's that force I find so addictive in movies and what has fed my obsession with them almost my whole life.
That being said, The Exorcist isn't a movie I will return to over and over again. Once or twice a decade is probably more than enough for me.
I find demon possession movies to be some of the scariest movies out there. The Exorcist sparked a whole horror film sub-genre of exorcism movies that are all disturbing in their own way and more often than not genuinely frightening experiences. But The Exorcist is still the best among them (of the ones I've seen). That's not to say the scariest (that title would probably go to last year's Paranormal Activity), but the most effective, well made and highest quality.
One aspect of that quality is the acting. How Linda Blair, a sweet, funny 13 year old girl was able to pull off the performance she did as convincingly as she did will always be one of the highlights of film history. That she didn't receive an Oscar for that performance will always be one of the biggest jokes in film history. And her amazing work was surrounded by flawless performances from Jason Miller, Max Von Sydow and Ellen Burstyn. This was director William Friedkin's next film after his previous, The French Connection, had won about every Oscar there was to win two years earlier and is one of the best films of all time, making for one of the best one-two punches in cinema's illustrious cannon. The direction and special effects in this movie are masterful and gave us one of the greatest screen images of all time (the one which now graces the DVD and Blu-Ray covers of the movie) of Max Von Sydow's priest standing below the possessed girl's window in front of her house, an ironic shaft of light bursting from it, seemingly inviting him into the chaos. Probably the most effective shot in the whole film.
The movie doesn't directly explain why Reagan is possessed in the first place, although we see her messing with a Ouija board early on and telling her mother about her friend Captain Howdy, who she uses it to talk to. How's that for family board game night?

There are three versions of The Exorcist out there now. According to many critics, like Roger Ebert, the best version is the original theatrical version, which makes sense considering how effective the film seemed to be on audiences at the time. The second cut came out in 2000, and is called The Version You've Never Seen, which is actually the only version I have seen, show's how much you know Warner Bros.  This version is about 8 minutes longer and features the very infamous 'spider walk' scene which I won't go into detail explaining but you can easily learn all about by googling it. This scene is one of the most disturbing in the whole film and the one image that stuck with me more than any other when I saw the film years ago. There are also a few extra demonic flashes that occur on walls and doors in the house which are also very frightening and effective little touches.  And the ending's a little longer, which I've read pretty much ruins the movie for many people, attempting a more happy ending over the bleakness of the original. But it's the only ending I've seen so it didn't ruin anything for me. The third version is a new 'extended director's cut' which just came out with even more chills stuffed into it which I know nothing about.

The Exorcist is a strange beast. There are religious leaders (mostly protestant) who denounce the film as evil and sinful towards God. There are also religious leaders (mostly Catholic) who praise the movie for its honest and realistic depiction of demon possession and will readily recommend it to those interested in delving deeper into this subject.
I see The Exorcist as a very well made, well acted, extremely scary and disturbing experience which probably does have the most realistic portrayal of Satan on film thus far, which means this isn't a film for people who don't wish to be offended, because it will, or are easily rattled or spiritually fragile.

Then again, maybe Reagan wasn't possessed, maybe it was all just PMS. She is a teenager after all.