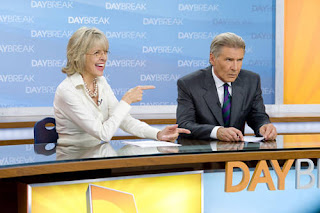 Have you ever seen Network? The 1976 film directed by Sidney Lumet? It's the greatest film about a TV network ever and one of the best films of all time. Network was so good in fact, that I am without the ability to watch a movie about a television network without automatically (and even subconsciously) making comparisons to it. This makes life unfair for those who take on television broadcasting as subject matter in their films as far as I'm concerned because how could anyone hope to live up to the height of where that bar was set by Network when I first saw it years ago.
The next thing I'm going to say just to get it out of the way is that I didn't really like Morning Glory. And so the inevitable question: Would I have liked it more, had I never seen Network? Probably not. So what was the point in even mentioning Network in this review at all? Cause Network's an awesome movie and you should see it.

Morning Glory is about a small New York breakfast show that isn't the Today Show, knows it and doesn't even try to be. Harrison Ford is a respected, award winning news anchor who basically gets conned into co-hosting the show, which is humiliating for him, and Rachel McAdams is the show's executive producer who will go to any length to boost the shows ratings.
That's the plot. The execution of that plot exercises every available rom-com (even though this isn't a rom-com by definition) movie cliche at its disposal. You'll be able to predict this movie right to its final frame before the first act ends. The director, Roger Michell, directs the movie like he just graduated with poor marks from the Rom-Com School of Cliched Shots and Sequences, using close ups, corny smile shots, walks into the sunset and most of all, slow-motion to nauseating effect.
Rachel McAdams is a good actress, maybe too good for something like this, as her character is a work obsessed socially awkward person who is so focused on her career she comes off as annoying in every other facet of her life. And annoying she is. Less than a third the way into the movie she began to really bug the hell out of me.

So that about does it for the bad. The good (and there is good) is what saves this from being a bad movie, to being an okay one.
The first and best thing about this movie is Harrison Ford. His character's a bit of a dick in the movie, but I liked him best, and that's in large part thanks to Ford's performance. This is easily one of the best acting jobs I've seen Ford do in years. He's pitch perfect as the snarly, uptight, egotistical old bastard who's in a situation out of his control, a place his character hates to be and usually isn't. The Academy usually ignores comedies, but his performance in this movie deserves a nomination.
Another thing I liked about this movie was the backstage studio stuff. The way a television station is run is a fascinating thing to me and it seems like they've portrayed it in a fairly realistic light.
The movie's also pretty funny. Well, it has its moments anyway. Of course, if you've heard anything about the movie you've heard about the weatherman. His is the funniest and most entertaining role in the film, and the part that offers the most entertainment value.
Finally, Jeff Goldblum. An actor who's so much better than a silly movie like this. I'm actually amazed he hasn't made the jump from character actor to lead actor yet. He's definitely got the ability, he needs to find a new agent.

I must admit, I went to Morning Glory solely for my wife. I knew she wanted to see it and I like to do things that make her happy. But don't get me wrong, I went into Morning Glory with a completely open mind. I was fully prepared to have any preconceived notions of 'just another run of the mill rom-com' dashed by the surprise feel good of the year. Sadly, that didn't happen and I continue to wait patiently for the next 500 Days of Summer to come along and give me hope as far as the romantic drama comedy genre is concerned.
Consider my fingers crossed.