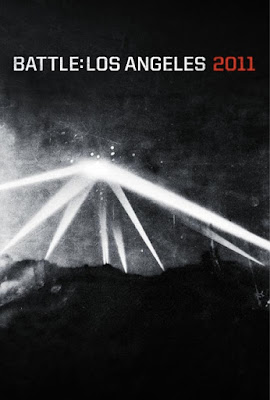 Battle: Los Angeles (or World Invasion: Battle LA, it's unsure which title they'll end up using) is this week's poster of the week. The movie comes out next March and is about...aliens! Yes it seems, whereas Twilight kicked off an overkill of vampire movies which thankfully seems to be coming to an end, last years brilliant District 9 seems to have kickstarted an impending overkill of alien movies. Some will be good, some will be bad, all will eventually begin to annoy the hell out of us till the next genre overload gets going. How good or crappy Battle: Los Angeles will be, I don't know. What I do know is that its poster is awesome and enticing. It has the look of those old UFO photos that people used to snap that usually turned out to be fakes but creeped out and fascinated us while we thought they were real.
Like all good psychological stimuli, it's what you don't see in this poster that has the most effect. Either a bunch of military vehicles are pointing their spotlights at an impending spacecraft or creature, about to emerge from the oil black clouds in the sky, or the thing in the sky is pointing its lights (?) at the ground. Preparing to attack? Looking for a safe place to land perhaps? Who knows. There are little orbs of light floating around in the poster as well that add to the mystery and suspense of the image.
Thanks to this poster, this is the kind of movie I don't want to know anything else about. Don't show me a trailer, a review, a synopsis. I don't want to know. I want to either be blown away, or have my anticipation smashed into smithereens of disappointment. Either way, I want to be surprised. That's when movies have the greatest effect. When you don't know what to expect.
Labels: poster of the week