Poster of the week: Eichmann 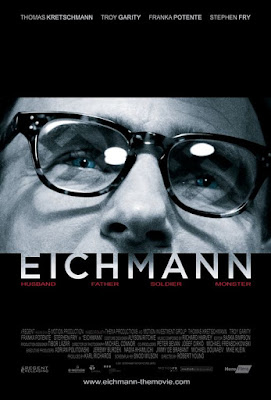 Note: *Okay, so I'm a little confused about the release date(s) of this movie. Apparently it was made in 2007 and released in Brazil in 2007 and has been released in different countries in different formats around the world every year since. I don't think it ever came to North America for a theatrical run, but this month it's being shown in a few theatres around the states. So technically it's from 2007, but because it's just getting it's theatrical run in America now, I consider it eligible for poster of the week*

So here's another less is more poster. I seem to gravitate towards those types. Eichmann's about a nazi commanding officer who is charged with crimes against humanity for aiding in the death's of 6,000,000 Jews. Wow. He claims he's innocent and everyone knows he's not, whatever. The reason I chose this poster this week is because, looking into those blue eyes we wonder if we're seeing kindness, or cold indifference? It could really go both ways. You could say 'those are surely not the eyes of a killer' or 'those are surely not the eyes of a sane man' and be right on both accounts. I love how the only colour is the blue and the little red lettering beneath the title, very effective. And the best part? If you look closely, you'll see swastikas faintly reflected in his glasses. Brilliant. So now is he looking with disdain, or affection at a nazi flag or symbol somewhere? It creates a very intriguing invitation to the film, which is important as WWII themed films are a dime a dozen every year.
Labels: poster of the week