Drama at its most undramatic 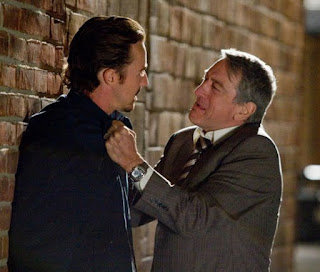 Strong acting, particularly from Edward Norton (who, if there's any justice in the movie world at all, will get an Oscar nod for this) is about all the reason there is to visit this very underwhelming drama about lies, deception, revelation and of course, the thing any Hollywood drama wouldn't be complete without, adultery. And lots of it.
Robert De Niro and Milla Jovovich are good enough in their roles, but their characters are both despicable people and their story is a hell bend on self destruction tale that isn't told with enough skill or grab to keep the yawns at bay for much of the time.
Edward Norton on the other hand, the chameleon, the skill and versatility most actors only dream of having, plays his part so well that even if his character's story wasn't interesting, which it is, very much so, his performance alone would almost be worth the ticket price.
He plays an arsonist who's been in jail for eight years and at a certain point in the movie has a spiritual epiphany that completely changes his mindset and gives him a hope and fresh breath of life that he hadn't had before. De Niro is like a counsellor who oversees Norton's upcoming parole hearing to determine if he's fit to rejoin society. And Jovovich plays Norton's evil wife.
That's about it. Certain plot points happen that are very contrived and not at all believable and the only real exciting scene in the movie, seen in the picture above, lasts about thirty seconds and ends anticlimactically.


Every time Robert De Niro does a new film, I get filled with hope. His career's been on a downslope pretty much since Jackie Brown in 1997. Some people might add the Meet the Parents movies to that list, and The Good Shepherd was a great film, but these things don't do justice to one of the great all time actors. Obviously it'd be great if he re-teamed with Scorsese at some point, but I just hope he starts making better choices. This is a guy who could pretty much be in any movie with a character over 55 that he wants. Who's going to say no to Robert De Niro? Robert, you're rich enough. Stop making movies for a quick buck and start seeking out the quality material.


I can't understand how Stone got a wide theatrical release. It's already bombed. It bombed in its first week. I'm constantly seeing movies on the shelves at video stores with big name stars that went straight to video because the studio didn't want to spend the coin marketing and releasing it to a wide audience. How the hell did this movie not get that? Even masterpieces like There Will Be Blood had to go the indie select theatre route before the Oscar nods came out and it finally got a wide release.
It's annoying because first run movie in big cities cost anywhere from $12.50 to close to $14 to see on the big screen. I understand that some movies are unexpected hits and some are unexpected flops, but seriously, who actually thought this movie had a chance at making its money back? According to Box Office Mojo, Stone's budget was $22 million (the bulk of which was probably De Niro's salary), and to date it's made back $1.6 million. Yikes. Someone just got fired.


Wait till this come out on video (which will probably be pretty soon, the way things are going for it) and download it or rent it and fastforward through all the scenes that don't have Edward Norton in them. You won't miss much story wise and you'll enjoy the movie more. I promise.