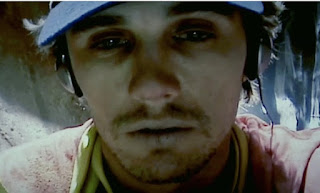 I was laying in a chair today getting a tattoo on my arm and while the tattooist was at work permanently disfiguring my body in a pretty and colourful way, my mind couldn't help but return to the movie I saw last night. No matter how tough you think you are or how many tattoos you get, it still hurts. It hurts in some places more than others, but it hurts. Those few minutes before you sit in the chair while the artist is prepping their tools are filled with that anxious excitement you get while waiting in line to get on a big roller coaster, the screams and speeds and metal racing along at an intimidating clip overhead. I couldn't help but wonder how closely those feelings matched Aaron Ralston's when he finally decided, after being trapped in a cave alone for days, his body already beginning to decompose right before his eyes, that in order to have any chance of survival, he would need to cut his arm off with a shitty pair of pliers and nothing else. Then again, as the movie shows us and we know from interviews with the real Ralston, after three or four days in a dark cave with little food or water and no human contact, your reason and grasp on reality will inevitably hop on that slide in the playground of the mind and begin its decent into the arms of oblivion, waiting patiently at the bottom.
But it's hard, for me at least, to know whether the decision to hack one's own limb off is one of partial madness, or an act of a desperate unwillingness to throw in the eternal towel just yet. A moment of clarity and a soulful strength that is only available to us as humans in our darkest, most hopeless hour. An action that is almost superhuman in strength or, as in this case, will. Because after all, regardless of your beliefs or where you think humans came from, it's a fact that right out of the box, we are hardwired to survive
at any and all costs.

Regardless of his mind space at the time, there's no doubt Aaron Ralston's story is a miraculous one. One that had to be told. By Hollywood. Hollywood loves those survival stories, and the more desperate the better. Is it in poor taste to exploit a story of hardship and survival in bleak circumstance? Maybe. Not in this case though. And if Hollywood's going to make it, who better at the helm than a trusted friend and director who with great talent and care lifted our spirits with the likes of Slumdog Millionaire and Millions, scared and disturbed us with 28 Days Later, showed us a well depicted example of someone losing their mind with The Beach, and gave us a visual punch in the face with Trainspotting. Yes, it seems Danny Boyle's almost entire career as a filmmaker has led him to this point. Lending a little bit from just about everything he's done to give him the tools and skills necessary to pull this story off while keeping the audience interested, engaged and entertained.
After all, watching a guy stuck in a mountain talk to himself for an hour and a half then cut his arm off does not a movie make.
From the first scene Boyle lets us know he has no intention of holding back the visual flair and excitement that's become almost his John Hancock on his films, despite the fact that he has one of the most varied filmography's in terms of subject matter of any major living director. And with split screens, flashbacks, hallucinations and a colour scheme that seems to pop even in dark scenes, he makes every frame a visual treat.

Which is good, because the subject matter isn't.
A movie with a storyline like this one, especially with it being a true one, would fall apart and collapse on the heads of everyone who made it if the Ralston performance wasn't at a full 10 the whole running time.
James Franco doesn't need to prove himself to anyone at this point. Whether comedy or drama or romance or anything, he always gives a good performance and I didn't bat an eye when I heard he would be the lead in Danny Boyle's new film. And he doesn't disappoint. I'm not going to do what every other reviewer has been doing and mention anything about an Oscar nomination in regards to his performance...well, I guess I just did, but only to say that that's all I'm going to say about it. The point is he's great in this film, he shows an emotional depth and versatility he hasn't before and the film is all the more effecting for it.

Since I started with talking about the arm cutting scene, I may as well finish with it.
Given that this movie right now is basically the film where that guy cuts his arm off to most people, the actual scene in the movie, like most things overblown and built up in hype, isn't as bad as people would have you believe. Don't get me wrong, it's a graphic and gruesome scene. Not gratuitous in its depiction, but certainly not about to let you off the hook. With Boyle's kinetic visual style and the camera taking you inside Ralston's head at that moment, the action of the scene is not static. It comes in and out of focus and shakes around and the worst part of the whole ordeal, in the movie and in real life, says Ralston, was getting through the arm's nerve (but in sight and sound it's also the most realistic and in some ways impressive). And I for one applaud Boyle's decision to film it the way he did. I don't think he did it to be gory or gross, after spending almost the entire film with Ralston trapped in this cave, to cut away from or dull down his most difficult (and heroic) task would be wrong for the movie and wrong for the audience.

If 127 Hours was any longer, it would begin to drag. If it was any shorter, it would feel rushed. Getting the length of a movie right is one of the great underrated skills a filmmaker can posses and Danny Boyle posses it. This movie is at once hard to watch and uplifting and triumphant. A well told, well made movie that will invade your thoughts with 'what would I do' questions long after you've left the theatre (or your computer screen, you movie pirates) and ensure you never take a drink of water for granted again.