Of crack and victory 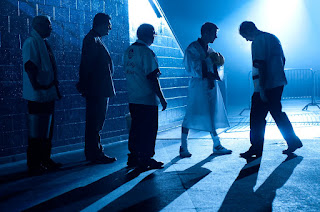 The Fighter is one of the best movies of the year, a gritty, hardscrabble story of family, addiction and perseverance.
The film follows 'Irish' Mickey Ward as he attempts to box his way to greatness amidst difficulties with his mother's domineering and not usually helpful personality, his brother and trainer Dicky's severe addiction to crack, and the neighbourhood he grew up near Boston which he can't seem to get free of.
The immediate comparisons to 2009's The Wrestler are going to be unavoidable, the films both have a similar look and feel to them, but The Fighter is so much more than the new Wrestler, it's a burning, intense piece of drama and has some of the most exciting sequences I've seen in a movie in a long time.
Mark Wahlberg and Christina Bale play the brothers Ward, both doing great jobs. Bale in particular is amazing, putting his method acting skills to use by again dropping an unhealthy amount of weight to play the drug addled Dicky. If Bale doesn't get an Oscar nomination for this, the Academy can kiss my ass.
The film's directed by David O. Russell, a director of great films (Three Kings, I (Heart) Huckabees), who's probably more famous for his on set tantrums then his celluloid accomplishments. Russell does a fantastic job, every frame of the movie feels real and looks just right. Even the boxing scenes, filmed in lower definition to look like a television sports broadcast from the 90's, which I'm sure will bug some people, felt like the right choice to me.
The boxing scenes in the movie are exciting. There's one particularly important match towards the end of the film that was so exciting it took all I had to keep myself from jumping up in my seat in the packed theatre and cheering Mark Wahlberg on.
More affecting are the dramatic scenes though, particularly the one's featuring Dicky's struggles with crack, his stint in jail and a very emotional scene where his whole family sits down to watch an HBO documentary they think is about Dicky's return to boxing (he was a professional boxer at a younger age whose big claim to fame is that he knocked Sugar Ray Leonard down, or did Sugar Ray trip?...) but realize that it is actually a film about the destructive and unglamorous life of a crack addict.

The Fighter is the third Boston area movie released this year (after Shutter Island and The Town) and I couldn't be happier. Despite Boston set films usually depicting crime filled, low income neighbourhoods and no small amount of unsavoury characters, there's something about that place that is perpetually appealing to me. Could be the close nit society that the neighbourhoods seem to breed, the fact that everyone's Irish and proud as hell about it, the pubs, the accents. Whatever it is, Boston will never tire for me as a movie locale.

Being a true story, and an underdog sports movie, the end isn't really a big surprise. There's no twists either. This isn't one of those films. The shocks, the excitement, the payoffs and disappointments are generated from real life situations and real life struggles and that makes this film ten times more emotional and rewarding than any big budget blockbuster you're going to see this year, or any other.
I can't say The Fighter is the best boxing movie I've ever seen (it would take a bona fide miracle for any film to bump Raging Bull from that title), but it is an example of a perfect movie. There's nothing I didn't like about it, it hit me in all the ways I want to be hit when I watch a movie.
I usually have one or two huge movie going experiences like this a year.
My last one was probably There Will Be Blood and that's now of my favourite films of all time...just saying.