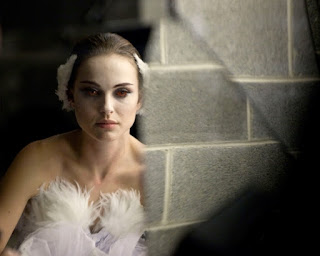 Black Swan isn't one of those movies you have to 'get.' Where its celluloid peer Inception required, even demanded multiple viewings to be able to wrap your mind around all the intricate layers of the plot unfolding via four decker time warp, Black Swan gives it to you straight up. An adaptation of a popular dance production using a life imitating art plot thread. The director, Darren Aronofsky, intends the film to unfold this way and shows us this by having a character explain the plot of the dance to a room full of dancers, which is a neat way of having a character explain the movie to the audience without taking us out of the movie. The movie unfolds much the same way the dance does, with slight variations, so any lack of twists or shocking revelations shouldn't come as a disappointment to anyone.
But there's something else happening as well. A story of obsession to the point of mental collapse is unfolding and it becomes uncertain how much of this has to do with deceit and mind games or just plain obsession.
Natalie Portman plays the White Swan, it doesn't matter what her character's name in the movie is, she's the White Swan. Mila Kunis, moving ever further from the bossy ditzy cuteness of her That 70's Show character, plays the Black Swan. But so too does Natalie Portman. Okay so now you're saying I'm a liar and this movie is more confusing than I let on. It's not. Somehow, and this is due to the immense skill of the director and screenwriter, the movie presents this story (these stories) in a way that leaves us with little to scratch our head about. Even towards the end, when things do start to get as muddled on screen as they are in Portman's head, by the time the credits stroll past us, everything has become clear.

Natalie Portman is 29 years old and has done 28 movies. A movie for almost ever year she's been alive is pretty impressive. It's also good practice and considering she's given solid performances every flick (that I've seen her in) since her first, Leon (the Professional), Black Swan is her time to shine and take all that experience and do something extraordinary with it, and she does. If this were her last film I'd drop an unabashedly cheesy pun down your throats and call this her swan song performance.
There's no shortage of writing on the excruciating training and preparation, emotionally, mentally and physically, that she went through for this role. Based on what I've read, I'd say it mirrors method giants Robert De Niro's legendary weight gain in Raging Bull, or Christian Bale's near legendary weight loss in The Machinist. If this were 2009 I'd say she's just about a shoo-in for the Oscar this year, but after Sandra Bullock bafflingly won last year for The Blind Side, from here on out all bets are off for best actress.
The other performances in the movie are great as well, particularly Vincent Cassel, but let's be honest here, this is Portman's show.

Okay enough Portman and the why's of the plot, let's get down to it. Is Black Swan good? Is it worth the hype?
Black Swan is awesome. The word masterpiece is grossly overused these days and I refuse to use the word 'epic' since the Emo and Indie kids have made it their own and feel the need to apply to it to anything that's of even remote interest to them, but awesome sums it up well enough. Don't be put off by the fact that it's a ballet movie, it's not really. It's a disturbing psychological horror film that happens to feature ballerinas. And if you think the ballet is all skinny girls floating around on their tip toes and dudes of questionable sexual preference wearing things that show off way too much of their junk, you need to see this film. What ballet dancers put themselves through in order to dance for a living makes the boot camp part of Full Metal Jacket look like a family trip to the McDonald's play place, but with less germs. And that's just the physical stuff. Granted, this is a movie about a character who's mind goes kaplooey as she prepares for a role in a dance and I'm sure there's lots of ballet dancers who are happy and healthy, but from what I've heard a lot of the non psychological stuff that's portrayed in this film is pretty bang on.
So is it worth the hype? I guess. I can see why there is as much hype as there is. This film is a different kind of beast from every other film at your local mutiplex, I can tell you that. It's dark and nasty and well told and compulsively watchable. It gets inside your head and leaves you on a downer. The kind of downer you might feel if your dog got hit by a car and you saw it happen. It's a movie that needs shaking off but refuses to be banished from thought because it is that good. It gets under your skin and in your head. And it's only the best and most well made movies that have the ability to do that.