...having nothing to do with Donnie Darko 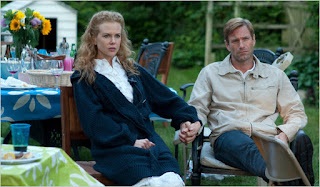 You watch the trailer for Rabbit Hole and say to yourself 'a very talky movie about a couple who lost their young son and are trying to cope in different ways...pass!' But Rabbit Hole is so much more than the sum of its parts. It's a searing, emotional, intense, heartbreaking piece of drama that is acted so well, written so well and directed so well it just simply should not be missed.
Rabbit Hole is about a couple who lose their four year old son to a traffic accident when he chases his dog into the street and is hit by a car swerving to miss the dog. Every parents worse nightmare? Yes. The movie takes place eight months after the fact and aside from a brief flashback, we are (thankfully) spared the horror of the film depicting the accident itself. Which makes sense as this isn't a film about a traffic accident, it's a film about how two people cope with a loss of such enormity in two completely different ways without letting it tear them apart.
At the beginning of the film you see the Corbetts, played by Nicole Kidman and Aaron Eckhart, going about their lives pretty normally and you assume you're entering the movie before the accident has taken place. Once you realize this is eight months later, what initially seemed normal is replaced by what is obviously some kind of grief repression.
Nicole Kidman's character feels the best way to get over her son's death is by literally erasing all traces of him and acting as though he was never there in the first place. Eckhart's character wants to preserve his son's memory and the drawings, fingerprints, videos and other little reminders of him are a comfort. It's immediately pretty obvious which one is coping in a more healthy way and I'd say overall Eckhart's character is an extremely likeable guy who has a good head on his shoulder and loves his wife very much, even when she is pushing him away. There aren't enough characters like him in movies these days.
But there are no bad guys in this film. If Eckhart's character is easier to like and is dealing with things better, Kidman's character is easier to feel empathy for as the parent who, despite her desperate attempts to appear otherwise, is obviously taking things a lot harder and is without the skills necessary to cope in a proper way.

A lot's been said of Nicole Kidman's performance in this film, of how great it is and how it's a 'return to form' for her or something. Now don't get me wrong, Kidman's great and an Oscar nom for her I would say is a given. But it's Aaron Eckhart who is the real star of the show. His performance is so good, so believable and at times so intense, that it's almost like a revelation to watch it. I'm excited to see him in his next movie now, whatever it is.
And last but not least, the lovely Dianne Wiest, such an amazing actress and so likeable (I will never forget her as the caring, kind, soft spoken mom from Footloose) never giving a bad performance in anything she does, I've never seen her better.

As Kidman's character strikes up a pretty unlikely friendship with the teenager who was driving the car that killed her son, which becomes borderline inappropriate, and Eckhart strikes up a friendship with a woman from a support group he attends, which becomes borderline inappropriate, Rabbit Hole takes paths that lead the characters dangerously close to almost complete failure in their attempt to cope. But it pulls the reins back and redeems itself at the last second choosing instead to champion the importance of marriage and commitment as the most effective way to get through something even as tough as this. Which is an admirable message to leave the viewer with.

This is simply a deep, amazing film with incredible insight into the effects of loss on people in different ways. One of the best films of 2010.