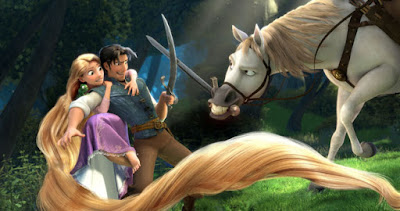 Tangled is almost one of those throwbacks. Throwbacks are awesome for artists of a particular entertainment whose artistic output once shone brightly for all to see, but lost their way somewhere and now sway dangerously close to remaining past their prime.
Disney was like that. Well, one facet of it. They acquired Pixar, which is easily one of the most profitable and film for film quality movie companies of all time, and their releasing of movies like the Pirates trilogy and the like are ensuring they get their rent paid every month. Even their more 'adult' film company Miramax has more hits than misses. All told, according to Wikipedia The Walt Disney Company is 'the largest media and entertainment conglomerate in the world in terms of revenue.'
Okay so what about the films they themselves over at the ol' mouse house produce? Shouldn't, if they have so much success in the films they finance that other people make, they be making the films that shine above the rest? The benchmark films? Well, they did, at one point. They made a handful (a large handful, a Rita McNeil handful) of films that are true classics in every sense of the word and among the greatest films, animated or otherwise, in history.
Sadly though, they've failed to live up to this precedent pretty much since The Lion King (some could argue Tarzan or The Emperor's New Groove onto that list, not me though).
So what am I getting at here? Am I about to tell you that Tangled is the next Disney classic? To take a seat next to Simba and gang's in the masterpiece throne room? Well, almost.
All the ingredients are there and this is about as close as the studio's gotten since their heyday to producing a picture of that calibre. But there are a couple of modern inconveniencing that sees a studio trying to be hip and 'with it' and sacrificing what could've been a true classic in the process.
The first place they went wrong is by making the movie computer animated. This film did not need to be computer animated. I know it's all the rage right now as far as animated features are concerned, and drawing movies by hand has been pretty much put to bed with a bullet in its head, and it works well for Pixar and it worked for the Shrek movies and stuff but come on, Disney Animation could be the studio that keeps the hand drawn picture alive! They did it with The Princess and the Frog, they're doing it with this year's Winnie the Pooh, why not Tangled? It just feels wrong for this movie, it feels like they did it so they could release it in 3D and charge a few extra bucks a ticket.
Which brings us to the second misstep, the casting of Many Moore as Repunzel.
When you cast a teen pop star (or former teen pop star, as the case may be) to do the voice and singing of the main character, you risk the movie feeling like one of those straight to video Tinkerbell flicks for kids under eight and you hurt the power and the enjoyment of the songs that are being sung. Alan Menkin, a genius songwriter whose been penning Disney film songs since the 80's is back writing songs here and it kind of feels like he knew Mandy Moore would be singing them, so he went and listened to her cd's and wrote her a bunch of songs that sound like her because he knows she can sing them. Definitely, it's the songs she doesn't sing in the movie which work the best, though even among those aren't any keepers along the lines of 'Under the Sea,' 'Be Our Guest,' or 'Can You Feel the Love Tonight.'

Tangled gets more right than wrong though, all the great stuff we grew up with in Disney features is there, Disney princess, handsome, charismatic hero type guy she initially hates but eventually falls for, evil witch/mother figure, trusty animal sidekick(s), cheeky humour that can appeal to all ages, a great story well told, happily ever after ending. You throw memorable songs, great voice acting and beautifully hand drawn animation in there and you've got a bonafide Disney masterpiece on your hands.

So go see it, take your kids, they won't care as much about my little qualms as you might, see it because it truly is a great film, see it because it's as close to a classic as the studio might ever get again, or at the very least ladies and gentlemen, see it because to date Tangled is the second most expensive film ever made ($260 mil) and the most expensive animated film ever made and at the end of the day we wouldn't want Mickey Mouse to starve would we? He might go looking for cheese in unsavoury places and get himself caught in a mousetrap. And that would be a shame.