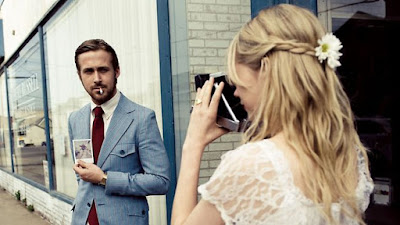 Blue Valentine is one of the most realistic looking, and feeling, movies I have ever seen.
Not to say that everyone's relationships and marriages will mirror this one, but I think more couples than not could probably say that there's more than one aspect of these lovers' story which has mirrored their own. This movie is an example of perfect storytelling. The back and forth timeline that tells the couple's story is nothing new and has been done many time before, but here it works so well because of the parallel of this couple falling in and then subsequently out, of love and the scenes chosen to represent that and where.

Unlike my above explanation, this movie isn't hard to follow at all. In fact, it's the simplicity of the narrative that adds to the realism as well as the enjoyment. The word enjoyment here referring to how well this movie is made and acted, rather than to this movie being some kind of feel-good affair. There's definitely some nice, cute scenes when the couple's falling in love and a particularly emotional and even uplifting scene involving Cindy (Michelle Williams) in a clinic and a last minute decision.
But for every happy love scene, there is one of a married couple who are finding it harder and harder to coexist, resulting in difficult scenes of bickering going too far, jealousy overcoming trust and failed attempts at sexual intimacy, until the movie reaches its ultimate emotional apex of both a couple at their happiest, the day of their marriage, and a couple at the (possible) end of their marriage, one scene following the other, leaving the viewer with mixed emotions. And this is what is so great, brilliant even, about this movie. Like in any marriage or serious relationship, there is a tug and pull happening throughout the film. A warm breeze preceding a cold one, a hill preceding a valley, the building of love preceding the tumbling of it (the tumbling of love referring only to this couple, not to marriages in general).

A lot has been made, somewhat unfairly, of the movie's sexual content and the fact that it was originally slapped with an NC-17 rating, which is one degree of separation from an X-rating, which of course is typically reserved for pornography. Major theatre chains will not play films with an NC-17 rating and so if a movie receives one, it won't be making its money back and most people will have to wait to see it on video. The production company behind Blue Valentine appealed the decision, arguing that the sexual content in the film was not graphic or gratuitous and therefore did not deserve the rating. The MPAA reviewed the film again, changed their minds (something which rarely, if ever, happens) and granted the film an R-rating without forcing any cuts to be made.
Seeing the film I can say there is a fair bit of sexuality, but none of it seemed graphic or gratuitous to me either. In fact, to go even further, I'd say it fits and works for the film. We spend the better part of two hours with a couple in their most intimate, private and personal moments together, good and bad. Sex is a part of marriage and relationships and while I wouldn't have complained about the absence of it in this film, I would say, and I don't feel this way about even a handful of movies I've ever seen, that the sex is fitting and a reasonable extension of our time with these people. Feel free to disagree, that's cool. That's just how I see it.

Blue Valentine is one of the best movies of 2010 and the best study of a relationship I've ever seen put to film.

PS- Michelle Williams was great in this and I'm glad she got an Oscar nod, but Ryan Gosling was better and it's a shame he didn't get recognized more for his performance, it was a pretty huge year for acting though.