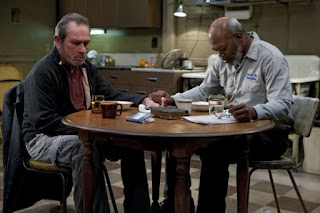 The Sunset Limited is an amazing, profound, spiritual, moving, absorbing experience that is at once a meditation on the meaning of life, a study of charity and selflessness in its purist form and a piece of work which finds two first rate actors at their best, a great director in top form and a writer of immense genius maintaining his stride.
The story is full to bursting with such simple moral and spiritual themes, it could be a modern adaptation of a parable from the pages of the Bible itself.

A man (White) tries to kill himself by jumping off a platform at a subway in New York into an oncoming train, but out of nowhere another man (Black) grabs him and pulls him to safety, then brings him to his home, a rundown, barebones apartment in a bad part of town where he seems to own nothing but a bed, a couch, a table, a fridge and a Bible. The two men talk all night long, White explaining why his life is no longer worth living, and Black trying to convince him that it is.
That's it. That's the movie. We don't see the suicide attempt, or the walk home, or even most of the night's conversation. The entire movie is a two hour snippet of their talk, taking place entirely in Black's kitchen. The movie was based on a play by the brilliant Cormac McCarthy and director (and star) Tommy Lee Jones does nothing to lead the format away from the stage and into a more film friendly blueprint. And thank God for that.
Making a movie that takes place entirely in one room is a tricky thing. It can be a great success (see last year's Buried for another example of this) or a painful bore. In The Sunset Limited's case, watching Tommy Lee Jones deliver Cormac McCarthy's dialogue through these two rich and intriguing characters is such an engaging treat that you don't even realize the whole film's taken place in one room until it's over.

As the film progresses, and White and Black give each other their views on the hardships of life and what the point to enduring them really is, two things occurred to me:
The first was that White and Black's conversation is the essence of spiritual warfare, with White speaking on behalf of the devil and Black on behalf of God. The devil taking the hands of the hopeless and jumping into the path of eternal resolution (and despair) and God grabbing the hopeless up and pulling them free from the arms of oblivion.
The second is a less profound but no less intriguing concept. Samuel L. Jackson's Black character could very easily be the reemergence of his most well known and celebrated screen persona, Jules Winfield. That bible quoting hitman from Pulp Fiction who, at the end of that movie, after experience what he thought was divine intervention, resolved to give up his life of crime and wander the earth until God placed him where he wanted him. Well, perhaps this is where he ended up. I certainly see and hear a greater resemblance to that character here than I ever have before in Jackson's work (Sam Jackson is actually a much more versatile actor than he's given credit for).
The Sunset Limited is an HBO original film. And while I can see a one room movie that's filmed and presented like a stage play not doing well in the theatres, it seems the perfect vehicle for HBO's always high quality and usually very unique movie showcases. The great thing about The Sunset Limited is that if you're not partial to HBO's usual array of foul language, sex and violence in its programming, all you have to worry about here is subject matter. But for every depressing, bleak world view presented by White, there is a hopeful, spiritually uplifting one presented by Black.

I'm not going to say where this film ends up. I'm not going to reveal whether White leaves Black's place to a fresh start and a new lease on life, or leaves Black's place to 'catch the next train' down at the subway. What I will say is there is something to be learned from this unique film experience. This is a film that just might make you examine your life, and thank God for every breath that makes its rounds inside of you. Or it could encourage you to want to do more for people in need, without the expectation of anything in return.
Or it could just be an opportunity to see some really good acting, writing and directing at work. That's okay too.