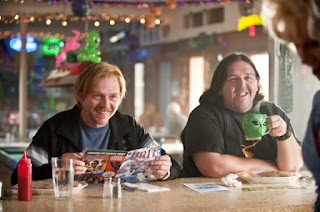 Everything is made up of everything else. The Beatles were an influence on almost every band that came after them, however indirectly at times, same goes for the Ramones and punk music, Nirvana and the 90's and so on. In the same way, one movie, whichever one it is, will be made up of winks and nods to other movies, some which are completely obvious (see Brian DePalma as Alfred Hitchcock for example), others which are less obvious on the surface, but more in the form of influence. Steven Spielberg for example, has said that before he begins filming on any movie he watches Seven Samurai, Lawrence of Arabia, It's A Wonderful LIfe and The Searchers. Paul Thomas Anderson, before filming There Will Be Blood, took his entire cast and crew into a screening room and showed them the film Network, a film which on the surface has almost nothing in common with Blood.
Simon Pegg and Nick Frost, the loveable duo who have made a career out of paying homage to their favourite movie genres and filmmakers (beginning with the zombie flick Shaun of the Dead and continuing with the cop comedy drama Hot Fuzz), set their sights on sci-fi and, more specifically, alien movies with Paul.
This is a hilarious, fun, feel good movie about two nerds from the UK who travel to the U.S. to attend Comic Con (the biggest gathering of the year of movie and comic geeks and uberfans all under one roof) and tour some of the U.S's most famous alien hotspots, only to encounter an alien themselves who's name is Paul and who they vow to help get home and out of the grasp of the evil government, who want to cut Paul's brain out for scientific purposes. A chase ensues, as do endless jokes and the winks and nods to the alien movie genre and the surprisingly deep self reflection that is present at some point in all of the Pegg/Frost homage flicks.

As with Shaun and Hot Fuzz, it will be those who recognize and appreciate the various winks and nods in the film who will get the most enjoyment out of it, which is okay as I think those are the people who these guys are making the movies for (after themselves of course). This one is perhaps more accessible than the other two in that regard, I mean who hasn't seen E.T. like 20 times? But even when the references sail overhead, the intention is obvious and always entertaining.

Seth Rogen (easily one of the busiest actors I know of in Hollywood at the moment) voices Paul (who is completely a CG creation) and even though his is a very recognizable voice at this point, his work as Paul is really a piece of pretty inspired casting, he's awesome and I'd say that this is probably his best performance thus far.
In fact, there's hardly a single actor in the whole film most people won't recognize. Jason Bateman, Bill Hader, Kristen Wiig, Jeffery Tambor, Jane Lynch, all funny people, all great in Paul. Even Spielberg himself, in one of the film's best scenes, gives a cameo playing himself.

Don't let the Pixar looking animation of Paul himself fool you though, Paul isn't a family movie. It has a lot of swearing, a bit of violence and some drinking and drug use. It's perfect for the mid teen to early 30's crowd though and the best tribute to a movie genre since Tarantino's Kill Bill, or you know, the last movie these guys made together.