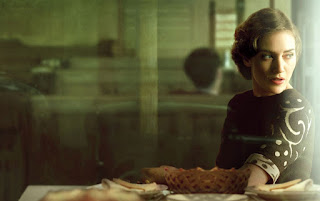 Mildred Pierce is the new five part miniseries from HBO based on the famous noir writer James M. Cain's book of the same name. It tells the story of a woman who, during the great depression, gets a divorce and has to find a job to support herself and two daughters.
This is a difficult task, it being the depression, and she finally reluctantly chooses a job as a waitress (being a waitress was looked down upon in those days and not considered a respectable job by most) which leads her (armed with her locally famous home made pies) to learning the business and opening her own successful string of restaurants in and around L.A.
That's the surface story. There's all kinds of behind the scenes family drama happening in every episode. Most of it revolving around Mildred's shaky relationship with her selfish, conniving little brat of a daughter and her on and off romance with Guy Pearce's fruit mogul who loses all his money when SunRipe comes along and monopolizes the fruit game.

Kate Winslet plays Pierce and does a really good job, but why, why does she insist on getting naked in every role she takes? I know this is HBO, notorious for the sex and nudity in almost all its programming, but I don't think I've ever seen an actress more willing to bust her bosoms out as much as she does. Along those lines however I do have to say that the character of Pierce is a bit of a tramp. She's not even officially divorced when she hops in bed with her husband's coworker and subsequently goes to the sheets with a handful of other men in the course of the series before eventually ending up with her husband again.
But that's really the only part of the series that I can look down on. As a whole this is a show that displays a woman's courage, independence and self made success in a time when woman weren't expected to do so, or it was just assumed they couldn't. It's also a fascinating look at the turbulent and even poisonous relationship between this particular mother and daughter and asks a difficult question about just how much crap your love for your child would allow you to take.

Mildred Pierce moves slow, keeping a careful pace out of respect to the story and not feeling the need to rush things by throwing in cheap twists or needless suspense.
It's also a series that switch easily between uplifting and difficult, leaving the viewer always unaware of whether they will be ending the episode on a high note or a downer.
It's effective drama with top notch acting, writing, pacing and direction. In other words, typical HBO.