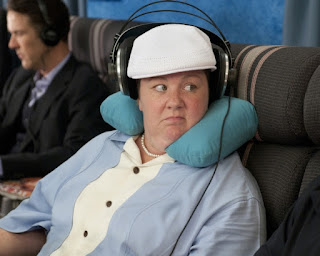 You'd be forgiven for thinking Bridesmaids is another run of the mill chick flick about a woman getting engaged, planning the wedding with her friends, only to have plans thwarted by some drama or other and temporarily veer off course until the inevitable final reel where everything is saved by some mushy mush nonsense and we all live happily ever after.  And to tell you the truth, you'd be forgiven for thinking it of this movie because that's essentially the plot. Where this movie differs from those other Jennifer Lopez or Kate Hudson starring wastes of untold millions is the how of this movie's journey from engagement to happy eternity pledge.
First of all and most important to this movie's meat and potatoes is the cast. With the exception of Rose Byrne, this is not a cast you'd typically see in a chick flick with Bride or Maid in the title. Every one of the women that make up the main cast are hilarious and fantastic in this film. Kristin Wiig and Maya Rudolph obviously need no introduction as their comedic chops have been proven time and again for the world as regular cast members on SNL. Previously somewhat unknown television actress Melissa McCarthy gives a memorable performance as Megan which will hopefully lead to jobs in more comedies for her. And Chris O'Dowd does a great job as Rhodes, a character which isn't as funny as the rest but which provides an important emotional backbone to the story and the various contrivances to the plot.
To put it bluntly and in simplest terms, Kristin Wiig (who also cowrote the movie) and director Paul Feig play Bridesmaids as a movie for girls (and guys I guess) who like movies about weddings but who also enjoy a dirty joke or a joke about poo every once in a while. The movie strikes the very tricky balance of potty humour and raunch without being overly immature or raunchy. But it strives for more than just being a chick flick for fans of Forgetting Sarah Marshall, it also has the emotions, the drama and the resolve of any number of wedding themed flicks for chicks (and the husbands or boyfriends they want to punish). And that's this movie's great biggest downfall. From the first scene to the last this movie, plot-wise, is a by the 'Hollywood cookbook for romantic comedies' affair. Predictable, corny, sappy, obvious. For me these things are a disappointment in a movie that has otherwise managed to, for perhaps the first time, given me hope for the future of wedding themed picture shows.
Then again maybe that's ultimately this movie's greatest accomplishment from a commercial standpoint. Containing within its cells all the predictability, the corn, the sap, the drama and ultimate sunshine that women flock to the theatre to witness in these types of movies in the first place. Only this time it has some well written raunch and poopoo jokes for the husbands as well. If that's not the definition of a perfect date movie, I don't know what is.