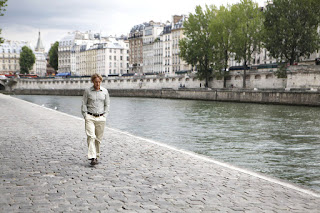 Midnight in Paris starts off with a number of static shots of Paris. Paris in the sun, in the rain, Paris at night, the Eiffel Tower, the canal, the bistro's, cafe's and sidewalk shops catering to tourists, the back alley's and cobblestone streets. It's breathtaking. A beautiful city in any weather. So is Paris without crime? No, I'm guessing it isn't. Are there area's to avoid? Probably, especially if the films of Jean-Pierre Melville are to be believed. But this isn't a crime film and this film isn't concerned with the exploits of Paris' thieves, thugs and hoodlums. This is a love letter, modern and historical, to Paris, France and the artists that have graced her rain slicked streets for centuries, making her what she is today and what she will be remembered for in the centuries still to come.

Considering his filmography, I suppose I haven't given Woody Allen a fair shake. I've only seen three or four of his movies, not enjoying the ones I've seen and have basically written him off as a taste I have not acquired and probably never will. But then my wife and I got into an argument and the way things were going, foreseeing escalation I decided to get out of the house for a couple of hours. What's the best cure for getting your mind off a silly fight? Why the neighbourhood picture shows of course! Not in the mood to see something I had already seen, or having Thor's thunder hammer bashing my senses for two straight hours, I opted for something light. Midnight in Paris happened to be the only thing playing that fit the bill. And boy did it fit the bill. Starting with those gorgeous images of a Paris I now desperately want to visit, Allen took me on a somewhat fantastical journey into the heart of Paris' history and historical landmarks over the years. To put it bluntly, I cherished every minute of this movie.

It's hard to really go into the specifics of the plot without giving away some of the funner surprises the movie holds, but basically it stars Owen Wilson as an author with writer's block (is there any other kind in movies?) who goes to Paris with his fiancee (a surprisingly bitchy, annoying Rachel McAdams, who's great playing against type), hoping it will inspire his creative muscle. Walking the streets at night he is taken (I won't say how) on a history lesson of sorts through 1920's Paris, while during the day his relationship with his fiancee deteriorates.

As I've mentioned, there's lots of winks, nods and outright factual info given on Paris in the 20's, and this is where my one qualm with the film lies. The story is told by someone who has obviously spent a lot of time in Paris and knows a great deal about its history, but to the casual watcher, like me, who has never been, nor knows much about the history, there's a fair amount of insider info that slips by and goes cascading over the head. The story itself isn't hard to follow, just some of the finer details of it.

Midnight in Paris feels like one of those films that can be called 'pure cinema.' Pure cinema here meaning a perfect visual representation of a story and all it has to offer. It's a joy to watch and easily recommendable to everyone, whatever your cinematic taste may be.

So have I been unfair to Woody? Should I go back and delve into his back catalogue and hope to find another experience of pure cinema? Nah. The guy's been making movies for 45 years, I think now he's just finally starting to get it right.