The 60's without the swing 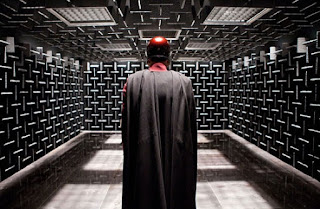 Looking back on my reviews of the first three X-Men movies, I was surprised to see that I actually liked them more than I remember. For some reason I had it in my head that I didn't like them at all when in fact I liked all three of them. They're all a damn sight short of masterpieces and don't come even close to a Dark Knight and even fall short of an Iron Man, but apparently they're alright. If I had known that going in to First Class, I may have gone in with a brighter disposition and less pessimism towards the movie before they had even dimmed the lights. As it turned out, that actually worked to my favour when the movie that unfolded before me was a great deal better than I thought it was going to be and certainly the best in this mutant series thus far.
Coming off a movie like Kick-Ass and with a previous filmography which includes
the likes of the hard nosed drug themed gangster flick Layer Cake under his belt, having director Matthew Vaughn helm this new X chapter was an intriguing prospect right off the bat. You had to wonder what flavour of mayhem he would bring to the franchise and whether he would take the series in a darker, more adult direction. Having now seen the movie I wouldn't say the overall tone of the movie was that different from what I remember of the other ones. It certainly has a couple choice scenes which wouldn't be out of place in an R rated picture. In particular there's a scene near the beginning which establishes the path Magneto will eventually take which takes place in a concentration camp during the holocaust and isn't afraid to make you feel uncomfortable. Overall though there isn't a whole lot that would tonally make this film stand out. Of course there are precious few directors who have the power to make a movie in a profitable franchise which involves many many movie studio millions and take it too far off the course.
For his first big budget popcorn flick, Vaughn does a good job though.
I would have to say that the biggest pleasantry of the film for me was Kevin Bacon's performance. The Baconator has been consistently great from Footloose onward and I don't recall a single performance of his I didn't like. But this has got to be one of his best. He plays bad guy Sebastian Shaw with all the evil slime and charisma you would hope for. A great piece of casting and it's good to see he's only getting better with age.
I've read very few comics in my life and never read an X-Men one, so I don't know how close the characters' origin stories in this movie are to the comics, but I really enjoyed the ones that are old in this movie. Magneto's story starting as a prisoner in a concentration camp during WWII is inspired, the way Professor X goes from a brash, headstrong young man to the Patrick Stewart portrayed, wheelchair bound man in the first three movies is fantastic and emotional, The Thing's transformation and the story surrounding it is great as well. All the stories of origin in this film are told well and simultaneous without the plot threads stepping on each other or causing the movie to run too long. Another great bit plot wise was the filmmakers decision to tell the story against the backdrop of the Cuban Missile Crisis. Weaving the two things together made for a more realistic story, which is a feat considering the movie's about human mutations with superpowers.
X-Men: First Class isn't one of the best superhero films I've ever seen. As well done as it is, it's still a superhero movie. It's a step up for the series but lacks the danger or gritty realism of a Dark Knight, or the believability and photorealistic special effects of an Iron Man. But it moves at a quick pace and is entertaining and a pleasure to watch from beginning to end. Hopefully this means the X-Men series is on a path to bigger and better things, then again, this could easily be this franchise's peak. The ball's in your court Marvel, don't screw it up.