Poster of the week: The Dark Knight Rises 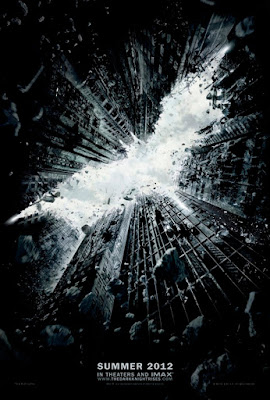 Despite still being in the filming stage and not actually getting released till next summer, the folks at the Warner Bros. marketing department are already fast at work getting Batfans hyped on the final film in Chris Nolan's brilliant masked avenger trilogy.
Sporting a poster which bears more than a little resemblance to Inception, the crumbling buildings and bat shaped opening at the top are all it takes to give me a shot of adrenaline thinking about what Nolan and co. are up to at this very moment with Rises. Though, really, the poster could have just about anything on it and just knowing that it's the first official Rises poster would elicit the same reaction. Did I mention I'm looking forward to this?
Labels: poster of the week