This guy can really...wait, what was his superpower again? 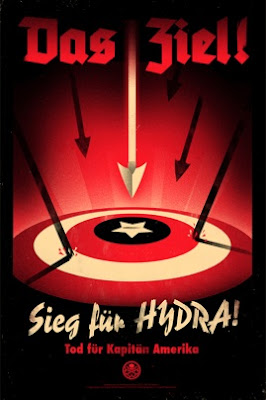 And so another superhero (if you can call him that) graces the big screen doing much the same as the other superhero's in the recent barrage of likewise films. Some do it better, some do it worse, but they're doing it.
I think at this point it goes without saying if you're going to be releasing another superhero movie, it better be one of two things. Unique, or just really, really good. To name drop a film obvious to the point I'm making, look at The Dark Knight a few years ago.
Was it unique? A little. More than unique it was just really, really good. It made sense, had characters that were well defined and believable, a great script with little to no cheesy dialogue, amazing performances, and aside from a little cluttering towards to the end, a fantastic story. I'll just come right out and say that Captain America has none of these things. Since the movie was released it's been getting fairly good reviews, but why? I don't get it.
Going down the list: It didn't make any sense, the guy's a wimp that becomes a super soldier, then goes and fights nazi's, one of whom has some magical rock of some sort that gives him superpowers and turns him into (sound the trumpet) a supervillian! What follows are a bevy of plot points involving these baddies that jump back and forth and all around and then Captain America is blown up and then he's fine, then he can't get drunk because of his superpowers, then he's (surprise) falling for the girl whose helping him, then something, then something else. This is how it felt watching the film. No backstory, no explanations, just one excuse for CGI and bad storytelling after another. The characters are nonesense. Captain America himself seems to have a bunch of silly little superpowers and a big shield (a prototype of course, that is made of the most rare metal on earth, of course, and the amount they had to make the shield was all there was left in the world...of course), the villain is some chowder head called Red Skull whose extremes are so naughty they may as well have called him Satan and got it over with. The script is ludicrous, the dialogue cheesy, unbelievable and obvious. The poor attempts are humour are (surprise again!) not humorous at all, the performances pretty much match the dialogue, enough said there.
The things I did like about the movie was that is was set in the past, though that can't be credited to originality as the new X-Men movie just did that a couple of months ago. And the fight scenes, while corny, looked great and were well directed.

I must admit, part of what bugged me about the movie was the seemingly intentional decision on the part of the filmmakers to tell a Captain America story to an audience that has read a bunch of Captain America stories and can follow the plot with relative ease. For a regular Joe like me, whose pretty much never read a comic book in his life, that decision placed me firmly in the dark for the majority of the runtime. Add to that the other, near endless reasons this movie sucks and its time and place setting and some cool looking action scenes make the fact that this movie is getting so much praise is one of the grand head-scratchers of the year for me.