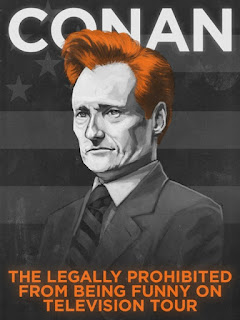 If nothing else Conan O'Brien Can't Stop is a picture of pure celebrity, right to the core.
It's a backstage pass to Conan's stand-up comedy tour which seemed to include very little stand up comedy, and much singing and dancing, skits and characters from his Late Night show, much bitching and venting about his Tonight Show fiasco and, for the VIP ticket holders (God knows how much they paid for their tickets) a meet and greet with the man himself afterwards, occasionally amidst other celebrities that stop by to pay their collective dues.

The film takes you on the tour with Conan as he performs in various cities in the States and Canada and takes you into Conan's home, the rehearsals for the tour, and in the backstage areas before and after the gigs. Now, this is all well and good, behind the scenes access to a celebrity's life can be candid, fascinating stuff, especially to the 99% of us who are not famous. However, it can also be annoying if the celebrity in question acts and carries on like a typical celebrity does. Conan, unfortunately, is that typical celebrity.

There's no doubt that Conan got screwed with his Tonight Show gig. He'd graduated to the cream of the crop as far as talk show's are concerned, thanks mainly to Johnny Carson and  to a lesser extent, Jay Leno. Conan says a few times that hosting the Tonight Show was a lifelong dream he had ever since he was a kid. And who can blame him? So getting that promotion would've been a career high for sure. However, America had gotten used to Jay Leno, especially the over 40 demographic who don't tend to stay up as late as the much younger demographic that had helped make Conan's Late Night show such a hit. So NBC wasn't ready to let go of their Jay Leno safety blanket and when Jay's new show failed to hit a cord, they decided to offer him back his 10pm slot and push Conan and the Tonight Show to the later midnight slot. This might not seem like something to throw a hissy fit over, but to Conan it was a big fuck you to ask him to go on later with a show that had had the same 10pm time slot since Carson. So Conan fought back and threatened to leave. NBC said 'fine, leave' and he did.

Bottom line: I don't blame Conan for being pissed about what happened. I don't blame him for reiterating that over and over and over and over again in the film. The wounds were still fresh when the film was made and he's going to be feeling raw. The thing I didn't like about the film was Conan himself. I appreciate he wants people to see what he's really like and what happens when he walks off stage but honestly, I kind of wish he didn't.
In one scene you've got Conan making jokes (complaining) about there not being anyone around when he gets off a plane in one city, then in another scene you've got him bitching about having to meet people in his dressing room after the show and signing autographs for people who have waited hours for him outside the venue. You've got him saying he's doing this tour because he misses being in front of an audience and being applauded and loved and gawked at, then he's pissing and moaning because fans want a picture and an autograph. Or because one of his stage performers brings their family backstage to meet him after a show. You've got him travelling around the country in a private jet, an oversized tour bus and Cadillac's, his goofiness and manic energy, once very appealing and funny on his talk show, now feels overbearing and annoying. I admit, though not a lot of people would agree with me, it would be hard to be surrounded by people who are kissing your ass and laughing at everything you do all the time because you're their paycheque, but Conan far too often comes off as a spoiled, self centred little brat who is without qualm to bitch and complain about fans, speaking engagements and, of course, the Tonight Show.

Conan O'Brien Can't Stop is a brave film. It truly is a behind the scenes look, not only at a comedy tour, but at Conan himself and this is what makes it brave. While he may or may not be aware of how he comes off in this film, this could change the perspectives of a lot of his fans toward him. It did for me. I don't hate Conan, I'm not 'against him' or whatever. He's still a funny, entertaining talk show host, I just know now if he ever finds himself in Edmonton I wouldn't walk across the street to catch a glimpse of him, or, God forbid, ask him for a picture.