For the love of God, don't call them monkeys! 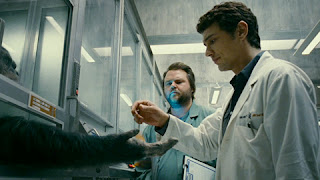 This is an idea I always felt I could get behind if it was handled properly. Apes are the closest animal ancestors to humans. Apparently, only a certain number of chromosomes separate us from them. While I don't personally believe humans were once apes that have evolved, watching the various apes, gorillas and monkey's at the zoo, one can see how Darwin and a certain chunk of the scientific community could come to that conclusion. They're very human-like in a lot of ways in their behaviour and the way they interact with things and with each other. So to make a movie where a scientist discovers a way to bridge those chromosome gaps and effectively bring apes closer to our level of intelligence, only to have the apes pull a garden of Eden and think 'hey, I'm naked and I don't know if I need you so much anymore' seems to me like a great idea for a Science Fiction story.

Rise of the Planet of the Apes is such a story and it's probably a little better than you think, though not as good as you might have hoped. In it the scientist, played by James Franco, who I think I'm becoming less and less a fan of as his career trots on, is developing a cure for Alzheimer's which he discovers not only repairs dead or dying brain tissue, but actually enhances it, hence the monkey (sorry, Ape) that it is tested on becomes nearly as smart as his owner.
The filmmakers do their best to explain the how's and why's of this in a sense that the audience can buy into and they do a pretty good job, but the film's quality is weighted down by some typical Hollywood cheese and gimmicky nonsense that could have easily been fixed. For example, there are some terribly cheesy lines like 'You've only got one shot,' 'I only need one' and 'you're the chimp handler, handle it' or my personal favorite, 'you know everything about the human brain..except the way it works.' Haha, jeepers. I'll bet whatever twelve year old wrote the dialogue for this film is super pumped about his new movie career.

John Lithgow plays Franco's Dad and in a somewhat silly melodramatic 'twist' I guess you can call it, he has a rapidly progressing form of Alzheimer's, which puts extra stress and importance on Franco getting this treatment perfected and on the shelves ASAP. Speaking of Lithgow, it's really good to see him pop up again in something. He is sorely underused. Then again, maybe he just doesn't want to work as much these days. Either way, he's great in this.
Slumdog Millionaire's breakout star Frida Pinto is also in the movie, as Franco's love interest, and while Pinto's a good actress she's not the same Frida Pinto we saw in Slumdog Millionaire. Gone is the innocence and fresh faced wonder, this is a Frida who has experienced success and fame and now, unfortunately, has that same air of heightened importance about her that only fame can create. She is a good actress though and does well here. (A random seven degrees of separation fact: Danny Boyle, who directed Pinto in Slumdog, made a movie right after Slumdog called 127 Hours, in which he directed James Franco. Useless tidbit).

The main ape in the film is named Cesar and at one point finds himself in captivity at the hands a mistreating ape worker played by Harry Potter's Tom Felton, who plays Draco Malfoy in the films. Felton, in his first post-Potter film is firmly on his way to establishing a stereotype by playing another snotty nosed bad guy here who really isn't all that far removed from Draco himself. A little flatter perhaps.
While in captivity Cesar organizes a revolt with the other apes being held there. Apes which seem to be almost as intelligent as Cesar is, even though they haven't had any alterations. Anyway, there's some pretty amazing scenes when the apes break out of captivity (that's not a spoiler if you've seen the trailer or have any sense of conventional storytelling), and take their fight for freedom to the streets of San Francisco.
While this was one of my favourite parts of the movie, it too suffers from its fair share of nonsense. In one scene, a gorilla jumps on a police chopper and brings it crashing into a bridge in a mighty explosion only to have one of the passengers emerge with little more than a scratch on his forehead. Mmmhmm.

I haven't seen the original Planet of the Apes movies, only the Tim Burton reboot, so I can't say if this honours the films that came before it or not, but it seems to me like the producers of this chapter wanted to take the series in a direction it hadn't been before and while it has its moments and isn't a total stinker, it suffers greatly from unoriginal plot contrivance and typical Hollywood big budget popcorn flick cheese.