The GERMans are coming! 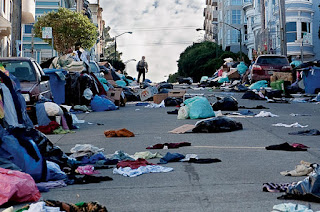 From Steven Soderbergh's wikipedia page:
"Soderbergh has made big-budget Hollywood films as well as art-house independent films; works with above-the-title movie stars and unknowns; directs adaptations and original material, both of which written by himself as well as other screenwriters. His versatility is also apparent with the genres which he chooses to film and his trades as a filmmaker behind the scenes. Traffic screenwriter and Syriana director Stephen Gaghan named Soderbergh "the Michael Jordan of filmmaking" for his ability to assume so many distinct roles in film production."

Contagion is a horror film for mysophobes. It's an epidemic film and an end times film, a current event, topical film, and a big name cast smorgasbord of huge A-list star power.
It comes along to tell us, on the tail of the H1N1 scare, which itself came on the tail of the SARS scare, to keep washing our hands and if you're on a city bus, for God's sake, don't touch anything!

Gwyneth Paltrow plays an American business woman who, while in Hong Kong for work, picks up a new and deadly disease, equal parts bat and pig, which jumps from human host to human host with the kind of rapid efficiency of a shotgun blast. As well as infecting her family in Minnesota, Paltrow stops off in Chicago on her way home for a quick affair with a previous beau and gets things started there as well. How's that for a warning against adultery.
As you can imagine, this new virus, which, unless you're one of the rare, lucky people who are immune to it (the only character in the film we know is immune for sure is Matt Damon's) will kill you in less than a week after being infected.
While this might sound scary, and it is, don't think you'll be sitting down to watch some 28 Days Later rip off, where the infected turn into flesh eating monsters, and no one in the film who is infected with the rare disease develops superhuman pig and bat powers.
This is a true life scenario. Scary because it's something that lurks in the jungles and farms where disease carrying food sources and winged 'creatures of the night' have the potential of infecting us and wiping a good chunk of us out.
In retrospect, H1N1 may have been a bit of an overreaction, but as one character in the film states as a representative for the Centre of Disease Control, 'with a deadly virus, it's better to overreact than to underreact.' Good point.

Soderbergh handles these weighty issues, and their consequences on the population (world, that is) without flash or bang or heroics. He plays the events straight and while there is an intensity and suspense involved in finding a cure before more people die, this is an almost purely character and dialogue driven piece that is never boring or overindulgent. There is a frightening overtone for sure, but there are also scenes of warmth and sacrifice. Two such scenes spring immediately to mind that I know I will never be able to watch without tearing up.

Contagion isn't the first of its kind and its most recent counterpart would probably be Outbreak back in the 90's, but considering the recent emphasis on reducing the transfer of germs, this seems like the perfect time for a movie like this. And it fits that one of the world's most versatile filmmakers should bring it to us.