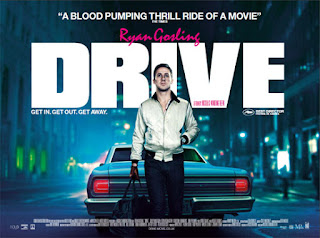 I couldn't figure out if Ryan Gosling's nameless character in Drive was one of the coolest characters to come along in many years because the character's cool, or because of the way Gosling plays him. I've always been a fan of Gosling's, especially after last year's amazing Blue Valentine, but it was in this film that I really began to feel like he's well on his way to becoming one of the best male actors around. This character, and Gosling's performance, are a great example of the minimalist powerhouse performance. The other side of the performance spectrum from the Daniel Day Lewis' in Gangs of New York and There Will Be Blood, screaming and frothing their way to Oscar night. This is the kind of quiet performance where the crack of a smile, the slight arching of the eyebrows, or the empty stare in response to a question takes the place of three pages of dialogue and animated body language. There's a cool, laid back quality to the performance that, coasting on the waves of slick and emotionally stylish direction, becomes all the more shocking when flickers of violence jump from his personality, or when he has to plunge a length of shower curtain rod into a bad guy's chest.

Yes, Drive is bloody. The violence is sudden, swift, brutal, even over the top at times, but all the more effective for it. Director Nicolas Refn plays with the audience in the second half of the film, using blunt tonal shifts to remind us that the love story portion of the film has taken a back seat to the violent gangster portion. A slow motion kissing scene between Gosling and Carey Mulligan abruptly followed by a man getting his face kicked in until God knows what it looks like (Refn's choice not to show us what it looks like makes the scene more intense, leaving it to our imaginations. Not to mention saving the film's makeup department a few extra bucks) is a good example of this.

But it wasn't the violence that moved me in this film, or made me decide, after two viewings, that this will likely be my pick for best film of 2011 (its main contender will probably be Eastwood's J. Edgar in November, but who knows), it was the slower stuff. Refn loves his slow motion and his close ups, and uses them at all the right times, to great effect, throughout. The music, sometimes robust, sometimes so faded into the background you have to strain to catch it, is perfect at every moment and the resulting visual and auditory perfection left my emotions in such a place that Refn was able to pluck them like a tightly wound harp.
Given the pace in the second half, you could probably describe the first half as a slow burner, but with a purposeful detachment. We are introduced to characters with no back story (sometimes not even a name), we are dropped into plot threads that have started before we join the movie and in some cases will continue after we've left, we are presented with a simple story and are given all the necessary facts to follow it. While I can see this rubbing certain filmgoers the wrong way, they are most likely filmgoers who have been trained to accept the big budget blockbuster Hollywood blueprint as the only way to tell a story. This is not that blueprint. We don't know all the facts, because we don't need to know them. But rather than this placing an emotional barrier between the audience and the characters, it creates a deeper level of empathy.
Gosling's 'man with no name' is nothing new. There have been many mysterious lonely men on screen that seem to step out of the fog and then disappear back into it at the conclusion of their given events. Clint Eastwood's cowboy in the Dollars trilogy, DeNiro's Travis Bickle in Taxi Driver, and the character that is most like Gosling's, John Wayne's Ethan Edwards in The Searchers (a man who is quiet and soft spoken but prone to acts of sudden and brutal violence), all men without a past, existing only to get their respective films' story's from point A (problem) to point B (resolution), and all doomed to a life alone.
It seems as though Gosling's character has no one and nothing and his friendship with Mulligan's character and his bond with her son, means that almost all the love he has to give is funnelled directly into those two. When things go awry and he must fight for their safety, how can you not feel something for this man and his mission.

Drive is about a mechanic who does stunt driving for the movies. About a man who hires himself out in the evenings for people committing crimes that require a wheelman. About a man who meets a woman and her son, grows to deeply care for them, then goes to great and sometimes terrible lengths to ensure their safety when it is threatened. But if you think that's all it's about, you haven't been paying attention.