With great vengeance and furious anger 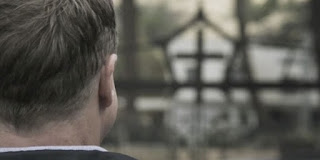 Well you gotta love Westboro Baptist Church. Oh wait, no you don't! They're a bunch of mentally sick, hateful, racist, closed minded right wing extremists who get a hard-on terrorizing grieving families because they get a kick out of seeing themselves in the media.
Red State is a none too veiled reaction/portrait of Westboro, albeit amped up a bit, in which an extremist church in a small town kidnap boys they coerced into hiring a hooker and plan to kill them during a service. Through a series of circumstances, some of which are completely unbelievable, the ATF show up outside the church and a massive gunfight ensues between the two factions.
It's obvious from the get-go that writer-director Kevin Smith hates Westboro and like minded Christian fundamentalism and his Five-Points Baptist church in the film is his way of expressing that, while also getting the audience to hate them as well. The congregation of worshippers in the film are an over the top, animated group who, under the influence of their fearless leader Granddaddy, are out to wipe evil from the face of the earth and send sin and sinner back to hell.
Smith is a talker, the characters in his films are talkers. I've never seen a film of his without numerous monologues and vocal tangents on a variety of subjects. And while this film has its long monologues, they're all very focused. Also in between the monologues are instances of bloody violence and intense action sequences, something Smith has dabbled in very little in his previous work. In fact this is the most un-Smith like film he's ever done. Which is a good thing for him as his last few efforts were so bad I was beginning to wonder if maybe his time had passed.
Smith is touting the movie as a horror film, which isn't really true. There's something definitely unsettling about the Five-Points psycho's in this film and their activities, just as there is about the Westboro psycho's, but this is much closer to a disturbing action film than a horror. And there's no shortage of it. The movie runs at less than an hour and a half in length and Smith keeps the action and intensity cranked up to 11 for the entire picture. The movie flies by and even when the government dialogue feels so fake you can tell Smith skipped on his research, you're on the edge of your seat.
Red State is packed with fine performances. Michael Parks, a sorely under-appreciated, underused character actor gives the best performance I've seen him yet give (which is really saying something) as the Five-Points preacher, and his congregation is made up of the kind of weird looking off centre characters that wouldn't be out of place as locals in a Coen Brothers film. Melissa Leo plays a member of the church as a character she and Smith want us to hate and we do, I haven't gotten this riled up at an onscreen character since Marcia Gay Harden in The Mist. John Goodman plays an ATF agent and while Goodman himself looks great after losing some weight, his casting here seems a little off. He struggles with some of his lines and his intensity just isn't where it should be.
Overall I'd say Red State is a great, intense film with an only slightly intensified picture of right wing extremist Christian fundamentalism. It's Smith's best film in years and while the film could have used a little more plot and more realistic dialogue as far as the government characters are concerned, its quick pace and intense violence make it fly right on by.
Rating: ****
Labels: movie reviews