Let him give you one of his cards 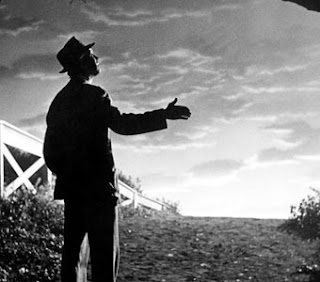 Elwood P. Dowd, as portrayed by Jimmy Stewart in Harvey, is without a doubt the single most likeable and genuine character in the history of the cinema. A man who's kindness is only outdone by his concern that everyone around him is having a good time, whatever they're doing, and that they shouldn't be made to feel uncomfortable. Which is where the film's great conundrum exists. You see Elwood is very great friends with someone named Harvey. Elwood is very fond of his friend and does everything with him and likes to introduce him to anyone they happen upon throughout the film, much to the confusion of the person they're bumping into, and to the great dismay of Elwood's sister Veta as, you see, Harvey is a six foot three inch rabbit. A 'pooka' that seemingly only Elwood can see and hear, at first anyway.

Pooka's in fact do exist, sort of. In Celtic legend it is said that in Ireland Pooka's (or Puca) are magical creatures that more often than not appear to cause mischief and in frightening guise's. They can appear to whomever they choose, whenever they choose, and most often in the form of a large black horse with glowing yellow eyes, although they have been known to appear as giant rabbits.
The Pooka in Elwood's life is neither fearsome, nor out to cause mischief (except that his existence brings many people to question Elwood's sanity), it exists as a companion and friend to Elwood and while it's never explained why Harvey chose Elwood to appear to, it's clear without us ever seeing Harvey that he is as fond of Elwood as Elwood is of him.

Jimmy Stewart went to war, already a huge movie star, as a fighter pilot flyer and instructor in the late 30's and came back a war hero. After he spent some time decompressing and deciding whether he should continue in the film industry, he made his post-war comeback in It's A Wonderful Life, as George Bailey, giving the greatest screen performance of all time (yes, even better than Brando in Godfather). For the most part Stewart's post-war career was filled with darker, more intense and difficult roles and films, perhaps a reflection of the effect the war had on him, perhaps a reflection of his getting older and wanting to challenge himself beyond the sweet drama's and fluffy comedies that defined his early career. Harvey is an exception to this change, for the most part anyway. The film's sweet natured, comedic tone put's it in the lighthearted category, but there are undercurrents of more serious issue's to be found.
The most obvious is the state of Elwood himself. He is generally regarded in the film as a 'crackpot' and we wonder at times if this is true. Are we witnessing the deterioration of a man's mind? Certainly a very likeable, harmless man, but sick is sick. This isn't helped when we learn of Elwood's penchant for alcohol. It seems Elwood and Harvey spend the bulk of most days at Charlie's bar, sometimes alone, sometimes entertaining friends or people they just met, while Elwood doesn't appear to be a drunk, he certainly appears to be an alcoholic on some level and this could offer a possible explanation for Harvey's existence.
But the film doesn't let us linger on these thoughts for too long and before we know it we are in the midst of another amusing plot turn. Elwood's sister Veta taking to an asylum to commit him and ending up getting committed herself, for instance.

Speaking of Veta, I want to take a moment to mention Josephine Hull, who plays Veta. Jimmy Stewart has always said that Harvey was his favourite of the films he had done and when someone would commend him on his job, he would always tell them that Josephine Hull was the real star of the show, playing a woman who simultaneously did and didn't believe in Harvey. It's amazing to watch this woman act. At first she is certain that Harvey doesn't exist and that her brother is sick. Then she doesn't seem sure, then she seems to believe he does exist, but she won't let herself admit it. It's quite an ordeal and when she is committed to the asylum, it's a funny situation, but one that isn't all that surprising.
Hull and Stewart were both nominated for Oscars but neither won, yet another travesty in a long list involving the Academy's decisions.

Harvey is a fantastic piece of entertainment, but one that raises a few questions. Mainly the one that if someone is mentally sick, but their sickness isn't hurting anyone, should it be treated or should we just leave them be. There's a pivotal and quite suspenseful moment in Harvey that asks and answers this question with great care.

Then again, I may be reading into Harvey a little deeply, it could easily exist for many viewers as a simple fairytale about a very nice man who enjoys whetting his whistle at the local watering hole and is friends with a very nice Pooka named Harvey.
Besides, in all honesty, if I could be as kind hearted, genuine and sweet a man as Elwood P. Dowd, I'd take the mental illness of having a six foot rabbit as my closest friend with a smile.