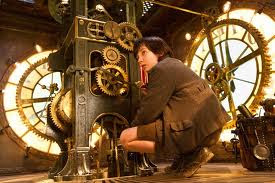 It's a damn good thing Scorsese knocked out a near masterpiece with Hugo, because after the great disappointment that was Eastwood's J. Edgar, I don't think I could've handled another of my filmmaking idols letting me down this year.
Don't be fooled by the trailer into thinking this is some Spiderwick Chronicle or Lemony Snicket traipse through typical family film fare, this is a culmination of decades of top shelf movie making experience and know-how, to deliver a beautiful, stylish and exciting love letter to the advent of the cinema by way of a coming of age story and meditation on young love, loss and lonliness, among other themes.
Ben Kingsley again graces Scorsese celluloid to great effect, playing a small toy shop owner in a Paris train station in the early(ish) twentieth century who forges a relationship with great friction with a boy who has been stealing toy parts from his shop to rebuild an automaton his recently deceased father left behind for him. Kingsley may or may not get an award nomination, I'm frankly tired of saying this or that deserves an Oscar every time I'm impressed by something, but he's amazing in this, as he was in Shutter Island and as he is in every role he takes.
The boy is played by Asa Butterfield, a very talented little guy who's actually had quite the prolific acting career in his young life.
Sasha Baron Cohen (the go-to actor for caricature characters with exaggerated accents), Emily Mortimer, Christopher Lee, Ray Winstone and Jude Law fill out the supporting roles to great effect, but it's Chloe Grace Moretz who is the star of the show in my opinion. Moretz may be the finest actress working today, with the only exception of Meryl Streep. Movie after movie she completely blows me away with her maturity and naturalism, and she definitely deserves a, well, you know.
Not to get overly technical or nerdy here, but let me just gush for a moment about the camera work in this movie. The very first scene is a sweeping, mind boggling flight that starts above the city of Paris and swoops down into a train station, keep going through the train station, in amongst the crowds and finally up to a tiny hole through which Hugo is observing the foot traffic. We then follow Hugo as he make his way to the clocks' inner workings for upkeep and repair and through the pipes and machinery that exist in the walls of the Paris station, all the while spinning and swimming and moving with the camera like it's a giddy school mate who can't wait to see where Hugo will take it next. This kind of technical prowess continues on throughout the film, but you get used to it and it doesn't pose a distraction, allowing you to fall into the story. There's a healthy dose of CGI for sure, in fact the most I've yet seen in a Scorsese flick. I still have mixed feelings about the use and overuse of CGI in today's movies, but it fits in Hugo and never looks fake or cartoonish. Another Scorsese first is the film's being shot in 3D. It's disappointing to see such an accomplished director employ such a silly gimmick, and you wonder how much influence his decision had from the likes of 3D's biggest and most vocal supporters, Cameron and Spielberg.
Again, as usual, the 3D did nothing to enhance the experience, it was a bother and a headache and if your theatre offers you a 2D option, unless you still get a real kick out of 3D that's worth an extra $3, take it.
Have you ever heard of the Georges Méliès film A Trip to the Moon? It was made in 1902 and is credited as being not only one of the first films ever, but the first to employ special effects. You can see the film in its 14min entirety on YouTube. Anyway, that film and its ingenious filmmaker feature prominently in Hugo. Being the self confessed film obsessive that Scorsese is, and the fact that A Trip to the Moon and Méliès' hundreds of other films are such important and impressive (for their time) pieces of film history, Scorsese uses the story of Hugo and his automaton, his new relationship with a young girl and his dodging of the train station security guard, who's great pleasure is to collar orphans hanging about and send them off to orphanages, and as the book the film is based on did, weaving them into a tribute and affectionate hats off to Méliès dream pictures and to cinema itself. It's a great compliment not only to Scorsese but most of all to Méliès that the parts of Hugo my four year old son liked best were the ones where we see the recreations and original bits and pieces from the Méliès films.
Hugo accurately captures the innocence of childhood, the trials of loss and loneliness, and the joy of redemption and rediscovery and spills it out onto a canvas of visual feasts and good fun for the whole family. One of the best of the year from one of the greatest of all directors.
Rating: *****
Labels: movie reviews