The last of the great brown buffalo 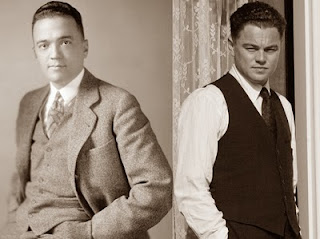 There are three filmmakers working today who's films I will be most excited to see above all others, on any given year they release one, regardless of what it's about. The first is Quentin Tarantino, easily the most exciting active director, the second is Mel Gibson, because his is one of the most genius filmmaking talents of all time, and the third is Clint Eastwood, behind or in front of the camera. Scorsese and Spielberg aren't far behind, but those are the big three. Tarantino will release his Django western next year and that will be the most anticipated release of the year for me, who knows when people will give Gibson money to make a movie again, but there have been rumours of a viking film in preproduction stages, and ever since Eastwood first let fly about his Hoover biopic last year I've been on pin and needles.
J. Edgar Hoover led a life so full of world changing events and personal scandal that to try and shove it all into a single film would be impossible. But Eastwood and Dustin Lance Black, who wrote the fantastic screenplay for Milk a few years ago and won an Oscar for it, try. Eastwood's been making movies coming up on 60 years and directing them for 50, so no one's going to tell him he doesn't know what's what, however, in the case of J. Edgar, what sounded like a great idea in theory, just didn't transfer very well to the screen. Eastwood and Black make a valiant attempt at touching on most of the major events of Edgar's career, as well as touching on his closet homosexuality and mentioning, almost in passing, his predilection for wearing woman's clothing. A big part of the film is the exploration of his being a mama's boy, to such an extent that an uneasy connection is made in the mind of the viewer to many of history's famous serial killers. That's not a comparison by the way, Hoover may have been a little sideways and corrupt in his running of the FBI, but he wasn't a homicidal maniac. Still it's hard to get a read on the guy as portrayed in this film, hard to find the soft spot that would make us empathize and even root for him in his darker and more challenging moments. Again, a more fleshed out character study, keeping an emphasis on his private life, while focusing perhaps on a single event or two, maybe the Lindberg kidnapping or his bumping of heads with the Kennedy brothers (Jeffrey Donovan's portrayal as Robert F. Kennedy is one of the highlights of the whole movie), would have served the narrative a little better and made for more involving and even exciting viewing.
Leonardo DiCaprio is a man to be admired and respected for his film choices. He's attained the enviable position in his career where he can pick and choose his roles, which leads to collaborations with pretty much every major film director today: Spielberg, Nolan, Scorsese of course, now Eastwood and Tarantino's Django next year, and unlike Brad Pitt, it isn't his personal life or who he's married to which has afforded him this ability, but his talent as an actor who's both versatile and intense in every role he takes. And herein lies another disappointment with J. Edgar, I just did not buy this portrayal. I've never heard J. Edgar's real voice, but DiCaprio's J. Edgar voice really bugged me, it sounded forced and almost satirical. There are flashes of a powerful performance that shine through in a few scenes, and as much can be said for the movie itself, but otherwise, and I hate to say it, this may be the first example of a Leonardo DiCaprio miscasting.
There is something to be said for the makeup department in this regard though. About half the film is Hoover as an old man. DiCaprio, the Social Network's Armie Hammer as his right hand man, and Naomi Watts as his secretary all spend that portion of the film in age makeup. Ladies and gentlemen: disappointment number three. This is a Clint Eastwood film, starring A-list talent, you'd think the budget could afford a decent makeup effects department that could whip up some believable old age masks for the actors. Not so. The old age makeup looks fake and while the actors do their best to act through it (Hammer gives the most believable performance), the cheesiness of their getups get in the way.
J. Edgar Hoover led a fascinating life, personal and professional, and there is a fantastic movie, or more realistically, miniseries, to be made about it. Painfully, this is not it. Too much is crammed into two and a half hours, which is told in a far too dull and boring way for all that history. DiCaprio's performance is the first I've ever been disappointed by, the aging makeup makes everything worse and the end result I think is that Eastwood and scripter Black's eyes were bigger than their stomachs.
It may not be as bad as The Rookie, but this is a rare misstep from a master filmmaker.
Rating: **1/2
Labels: movie reviews