Sounds of a San Juan night 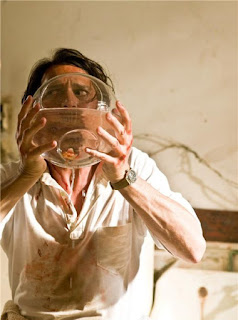 Some movies get lost in development hell. That is, the filmmakers and or producers never get around to the actual filming of the movie. Some get shelved upon completion, usually because the company that bankrolled the film doesn't like the finished product and would rather cut their loses than pony up another wad of cash for the marketing, distribution and so on of a film they think is going to tank. Some films get pushed right to DVD, either because that was the plan from the start, or because, see above. And some, like The Rum Diary and The Beaver before it, are completed, ready to go and for whatever monetary reason the suits atop Hollywoodland have, the release date gets pushed, and pushed, and pushed, and pushed. We all know the story behind The Beaver's crass treatment in this regard, what with the whole Gibson fiasco, but The Rum Diary's reason for numerous release date switches since it was 'in the can' a full two years before it finally came out are quite different and actually pretty amusing. Apparently, with Depp making so many films every year, every time the production company chose a date it rubbed up a little too closely with another Depp film coming out around the same time and so was pushed back, only to have that date rub up against another Depp vehicle and so on. So in order for the studio to avoid someone else's Depp film out drawing and possibly sinking their Depp film, The Rum Diary got the run around until it was finally clear enough on either side to run competition free. Bottom line: That's star power right there.
Johnny Depp's bumping into himself aside, The Rum Diary was a hard thing to get ahold of. It didn't seem to have a discernible narrative and when it did, or tried to, it was fleeting. Sure there are things happening and story arcs appearing and disappearing, but it was almost as though the movie existed for its anecdotes on drinking and general debauchery in San Juan, rather than for the purposes of its characters' plights.
Anyone who's seen Fear and Loathing in Las Vegas is familiar with Depp's iconic turn as Hunter S. Thompson. And at first glance, despite both stories being written by Thompson about experiences had by him, you'd be forgiven for thinking these characters are not based on the same man. The manic, drug crazed, cartoon that is Thompson in Fear and Loathing, is no more than a quiet, alcohol fuelled yes, but respectable citizen in comparison. But these are the same man. In regards to the filmed exploits of Dr. Thompson, you could consider Rum Diary a prequel to Fear. This is Hunter starting out, still learning, still trying to get his foot in the door, so to speak. And while he drinks like a fish for much of the picture, and indeed does spend a night 'sideways' on a hallucinogen, it would take years of such abuses and journalistic triumphs to create the figure that would emerge in Las Vegas in Thompson's masterpiece. Depp was a very close friend of Thompson's while he was alive, understands these differences and represents them beautifully. At this point, it's fair to say that Johnny Depp is most likely incapable of giving a bad performance, and so we mark his work in this film as typical. Which is by all means a compliment.
Joining Depp on the wings of this adventure are a very talented and (appropriately) eclectic cast including one of my favourite, very much underused actors, Giovanni Ribisi, playing a character that has to be seen to be explained, Aaron Eckhart as a stuffy millionaire, Michael Rispoli as the right hand man, Richard Jenkins as the stresspot Editor in Chief, and the almost illegally beautiful love interest in Amber Heard, who's appearance in this movie is not only a testament to her looks but also her acting ability, as she beat out the likes of A-listers Scarlett Johannson and Keira Knightly for the role.
There is certainly some fun to be had in this movie, the energy level is pretty high throughout, the locations are beautiful, even when they depict the kind of slum living conditions you and I would avoid upon a trip to Puerto Rico and the skill levels in front of and behind the camera are top notch, but while a lack of narrative was just right for Fear and Loathing, here it hurts the picture and leaves you feeling that maybe there was something more to the story in regards to the film's late arrival than Johnny Depp bumping heads with himself. But maybe it fits that Rum Diary be the Godfather III to Fear and Loathing's Godfather II, after all, the crazier Hunter himself got in his writings and in his life, the more entertaining.
Rating: ***
Labels: movie reviews