Indiana Jones, Jr. (and his dog) 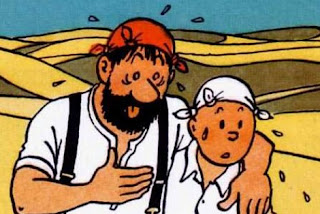 I remember the old Tintin cartoon that used to be on when I was growing up. I also remember my school library having some of the books and reading them when I was in Elementary school. Apparently the States didn't have Tintin stuff. The books and the character are a European creation that happened to catch on in Canada I guess.
Hearing the Spiel was going to adapt the stories into a big screen Avatar-style animated extravaganza was a good day. The books always had a simple, but action packed charm that would fit well with not only Spielberg's filmmaking sensibilities, but also with our current advancements in film animation.
That being said, I'll be the first to admit that popping Tintin's barebones 2-D familiarity out to a rounded 3-D version looks a little weird and takes some getting used to, especially if you're a fan of the lads original adventures. Spielberg riffs on this towards the beginning of the movie when Tintin is getting a self portrait done that comes out looking like his formerly represented self. Really the only characters in the world of Tin that do seem to benefit from the transition are Thompson and Thompson, who you feel watching the film were born for 3-D animation.
That oddness ends with the characters though. The rest of this world is truly a sight to behold. I know from the articles I've read and interviews I've seen that the entirety of this film is animated, but at times I had trouble believing it. I have never, never seen animation this good, or this realistic in a movie before. And yes folks, that includes Avatar. And here's another chin dropper: This movie is being shown in 3-D and that enhances the film and its animation. I have been a vehement advocate against 3-D since shortly after it made its annoying comeback a couple years ago. With very, very few exceptions I find seeing a movie in 3-D is not only a waste of money, but hurts the film rather than helps it. I see it as little more than an excuse for movie studio's to stick their sticky fingers that much deeper into our pockets at a time when going to the movies is already a highly overblown expense. So, without claiming to be an expert, take it from me: When I say The Adventures of Tintin is made a better movie going experience thanks to it being in 3-D, I mean it.
The fim is based on three of the original comics: The Crab With the Golden Claws, The Curse of the Unicorn and Red Rackham's Treasure. I know I read almost all the twenty-four comics when I was younger, but remember little about them at this point. I did however reread The Curse and Red Rackham when I heard about the film and I must say the choice to adapt three comics into one film wasn't the best way to go. The comics are short and making just one into a feature length film would be stretch, but it feels like Spielberg and Peter Jackson dropped some story in favour of one outrageous action sequence after the other. This makes for a very exciting, fast moving picture, but with very little meat left on the bones in way of character development or an enveloping story. There is a story there, and it's easy to follow and has some nice touches, but it also feels shallow and seems to exist as an aside, bridging one set piece to the next.
This is my grizzled, snobby inner film buff talking though and kids going to see Tintin won't be bothered by such (to them) mundane criticisms. All they'll see is what my kids saw: A boy, his dog and some colourful companions on the search for treasure and clashing swords (so to speak) with pirates and criminals. Which makes Tintin a fantastic family film. Enough spectacle and visual pizzazz for the cineaste, and enough excitement and adventure and danger for their kids. And enough of both for those who reside somewhere in between the two.
There are two more Tintin movies already greenlit and in the works and I expect the films will get even better as they go. As it is, Tintin is I think exactly what it sets out to be: An action packed mystery adventure for the family that puts to grand use the very top in motion-capture animation advances that are currently available and finally, finally gets
3-D right for once. $15+ is still a lot to pay for a movie, but it certainly stings a lot less pulling the cash out for something that feels worth it than say, the Alvin and the Chipmunks sequel.
Rating: Movie: ****
Experience (with 3-D): ****1/2
Labels: movie reviews