It sounds a lot tougher than it is 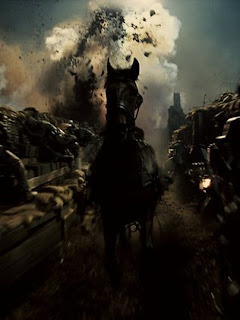 If you look at Rotten Tomatoes, the last two Spielberg releases, coming out just weeks from one another in North America, are both sitting at around a 75% rating. Not bad at all, a 'certified fresh' rating, meaning anything that has a rating of 60% or more. But for Steven Spielberg, I don't know, that seems low to me. Not only arguably the most powerful man in Hollywood, the Spiel is also one of best loved, by pretty much everyone, seeming to posses that rare gift of giving the critics and the audience what they want with nearly every release. And while Tintin and War Horse are by no means failures in any way, they both come sans that special something that Spielberg has stashed away all to himself for sprinkling on his films, making them appealing, technically savvy and entertaining with relative ease.
Tintin came out here a few weeks back and was by far the most visually impressive film of the year. The animation was amazing and the 3D was fantastic. But the focus seemed to be entirely on the technical stuff and the action set pieces, not so much on story.
War Hose then, is intentionally story heavy. Not exactly the opposite of Tintin, there's still a great deal of technical wizardry on display: Horses and soldiers profiled on a vast horizon with the sunset behind them (this is a common Spielbergian shot), WWI battle sequences that don't have the realism or gritty sting that the ones in Saving Private Ryan do, but are impressive nonetheless, and sweeping shots of all kinds of things for emotional effect.
But while the story's all there, it itself is also the film's biggest undoing.
The plot, adapted from an early 80's children's book and made more recently into a successful stage play, concerns a horse who is raised by a boy and his family until WWI breaks out and the boy's father, strapped for cash and in danger of losing the family farm, sells the animal to the army. The horse is then set on a course of events to which the title refers, being passed from one set of hands to another, having the good fortune to always find itself in the care of a kind man who falls immediately for the animal's charismatic ways, great strength and otherworldly will to survive whatever comes its way.
As the movie progresses, Spielberg packs the sentimentality on pretty heftily, making sure to pluck every one of those tear tuggers until by the end your teeth start to ache with the sweetness of it all. The story's also so unbelievable, especially when the horse enters the war, that it flirts with being silly. I know that some stories are too incredible to be believed and that events which adopt the moniker 'stranger than fiction' happen everyday, but I think that when a film passes itself off as anything less than fantasy, it should have an anchor of truth to it. This is one of those films that has just a few too many coincidental goings on to be taken as seriously as the filmmakers would like.
Overall though, War Horse is a pretty good family film that has some powerful moments, some great shots and visual sequences, and most impressively, as far as I could tell, features all real horses. And make no mistake, the horses are the star of the show, the human actors are all supporting players. It might not be the best choice this week for a film to catch with your family while on Christmas break, but it certainly isn't the worst.
Rating: ***
Labels: movie reviews