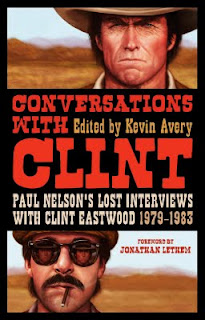 Conversations With Clint is a book compiled of a series of interviews Paul Nelson conducted with Eastwood for a Rolling Stone cover story that never actually came to be. The two met and discussed many, many topics over a handful of long interview sessions between 1979 and 1983. For Clint Eastwood fans, this is about as up front, open and intimate a piece as we're ever likely to have on the man, who's known for being very private and none too generous with reporters. To be honest, this openness is a blessing and a curse. A blessing because you'll get to hear some pretty unguarded responses from Eastwood on everything from politics to movies (his and other people's) to what it's like being famous, he even briefly talks about his first marriage and its, at the time, upcoming divorce issues. On the other hand, it's a curse because some of Clint's viewpoints are frustrating to read. For example the way he feels about certain films and filmmakers like Psycho (it has no real narrative, and is only really a couple shock scenes), The Shining (not scary at all, overindulgent, the acting is stiff and the tracking shots are annoying), Stanley Kubrick (some weirdo who has shut himself off from society and hasn't made a good film since The Killing), Apocalypse Now (a pointless trip up a river with no story to make it interesting, Marlon Brando was miscast), and so on. Paul Nelson is also frustrating to read at times. I know he's a fan, and he was a fan when it was considered poor taste to be a fan of Eastwood's, but rather than really challenge Eastwood, he comes off more often than not as a starstruck kiss-ass. A good example of this is his gushing over certain films Eastwood made only to have Kevin Avery mention in the liner notes that Nelson in fact didn't like the movie when he spoke to other people about it. I get that Eastwood, even back then, was a larger than life personality and any reporter would be hard pressed not to be somewhat struck to be spending time with him but come on, challenge the guy. Tell him that The Gauntlet was a piece of shit and ask him what he was thinking when he decided to make it.

Overall though, this is a quick read and a fine portrait of a megastar halfway through an iconic career. It's fairly intimate and Eastwood in the end comes off as a pretty cool guy who isn't about to be falsely modest, he knows he's a huge star and doesn't mind patting himself on the back for some of his better films, but also without coming off as an egotistical diva. He doesn't mind being put down in the press and could care less what you really think of him.
It's not as exciting or educational as Hitchcock by Truffaut, or Conversations with Scorsese, but it's worth checking out. Just be prepared to shake your head when they spend three pages talking about why The Shining sucks.