And they all fall down 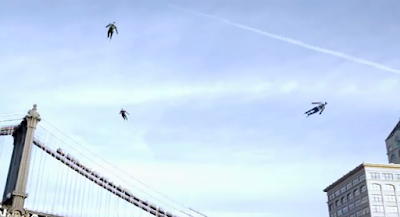 Though it's becoming dangerously close to being little more than an overused gimmick, the found footage genre of film is in full force, and no longer is it used for scares either.
While horror films have the most to gain and feature the best uses thus far of found footage cinema, films like District 9 and this years Chronicle show that there is entertainment to be gained without the boo's and gotcha's of Paranormal Activity, The Last Exorcism and the lady that started it all, that rascally Blair Witch herself.
With found footage storytelling in full swing, some of it great (Cloverfield), some of it God awful (Apollo 18), the question that must be asked of the film employing it is: Is it necessary? Does it make sense? Is it more effective? Or are the filmmakers just trying to capitalize on a trend? As far as Chronicle is concerned, I haven't honestly made my mind up about it. Certainly there's a kind of realism that exists in found footage that can be absent otherwise, but if your actors are talented enough, your cameramen and director know where to place the camera and your story is a strong one, the audience will buy it.
I think Chronicle could've been made without the found footage angle and been just as good. As it is I guess I'm indifferent to it in this movie.
The movie itself is a great idea and a welcome change of pace in that other genre flooding we're experiencing right now, the superhero flick. It's also simple enough that the filmmakers don't need to spend much time explaining things and can get right to the juicy stuff: Three kids find a hole with a glowing piece of..something in it that's making strange noises, they investigate and when next we see them they are developing superpowers which, when harnessed correctly, allow them to pick up and bend objects at will and fly. Things go south when one of the boys, an abused loner, has an embarrassing incident with a girl and goes a little batty, going from superhero to supervillian, as it were. This being a found footage film, some of the effects are very realistic and well done, some look almost as fake as we know they are. Towards the end of the film, as things start to get destroyed and the set pieces grow larger, the effects simultaneously get more impressive and at times have a hard time keeping up. I don't say this in a snotty, I could do better kind of way, I couldn't do better and every effect up on that screen is impressive, even when it fails to live up to the realism in the likes of District 9 or Cloverfield.
The actors are all great in this film, not many of them are unknowns, which is a little pet peeve of mine with these found footage flicks. If your gimmick with your movie's going to be that everything we're seeing was found in a camera in the woods or wherever, cast unknowns, the minute we recognize someone on the screen, it kills the effect of the gimmick. That's what Blair Witch, District 9 and Paranormal 1 all had going for them that made them that much more effective and in some cases scary. We've never seen these people before, and somewhere in our subconscious, we believe that what we're seeing is real, that some random person or persons experienced these things and we're watching the true chronicling of events, no pun intended. But the actors in Chronicle are good, very naturalistic and I hope to see them again in other things.
As the film builds to its climax and things get more intense and out of control for our young hero's, there is a holy shit factor that begins to take hold. As in, 'holy shit, this is not what I expected and is more awesome because of it.' I won't, obviously, ruin what that holy shit factor refers to, but feel confident you'll experience it yourself if you give this a try, which you should. It's a unique, exciting, fast moving superhero (or anti-superhero?) film that, while no doubt jumping on a popular band wagon, is a pretty fun ride.
Rating: ****
Labels: movie reviews