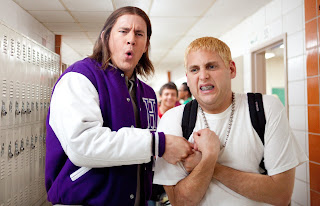 21 Jump Street is best when it's poking fun at itself. Tongue-in-cheekily referencing the show it's based on, mentioning how remakes are made by people who are out of ideas and 'recycling the same old shit' and employing in a brilliant cameo a certain past teen heartthrob who grew up to be..well, a present adult heartthrob.
It's also a breath of fresh film air to have characters in the film in their late 20's pretending to be high school aged kids, rather than actors in their late 20's pretending to be high school aged characters.
21 Jump is a witty, funny, fast paced film that isn't afraid to play with conventions, but is also unafraid, unfortunately, to fall back on obvious plot points and even, towards the end, lean right into not making any sense in a couple of big ways.
Channing Tatem's had an interesting career. Mainly nabbing roles in the kind of nonsense I go out of my way to avoid, I had basically only seen him in the God awful Haywire of last year and was very pleasantly surprised to see how well this role suited his..talents, so to speak. He plays a bulldozer of a man, which is good because he is a bulldozer of a man, who in high school was a popular douche bag jock type (there's one in every movie high school) who had a hand in terrorizing Jonah Hill's (My Name Is era) Eminem wannabe nerd type (see picture above). Five years later they're both in Academy training for their local police department and (surprise, surprise) the big jock excels at the physical part but bombs the intellectual part and the nerd vise-versa. So they team up and help each other through and become best buds (awww) and are partnered together fresh out of the Academy gate. Through one thing and another they find themselves on undercover detail at, yes, 21 Jump Street. A division that sends young looking cops to high school's to infiltrate the wrong doings of the student body, in Taten and Hill's case, the supplier of a new synthetic drug going around that has caused the death of one of the students.
This is where the movie falls into convention and becomes predictable, borrowing jokes and twists from movies past, but does so better, with more visual stimulation (look for a talking ice cream cone) and better jokes. I can appreciate that. If you're going to recycle, make your version better. The only time the film completely lost me was in the final act, but to explain why would be to break the spoiler rule, so all I'll say is, they eventually stop caring whether the movie breaks from common sense.
Jonah Hill, in his first post Oscar nom role and his first (not that it matters) post weight loss role, is great at being the Jonah Hill we all know and love. The Superbad Jonah, The Sitter Jonah, the crap load of voice work for family movies (minus the swearing and dick jokes) Jonah. He's good at the more dramatic Moneyball stuff, but best at this. Hopefully he keeps a place on his roster for these roles when he starts in on the more thinking man ones.
James Franco's little bro is also in this and, while it took me half the movie to realize who it was, I was thinking the whole time 'this guy looks and sounds exactly like James Franco.'
He's very good though and I'll be interested to see what he shows up in next.
21 Jump Street is reminiscent of a lot of buddy cop and raunchy high school movies and plucks the best parts of some of them and adds a little cherry of its own and comes out the backside a good time with some really poor plot choices that expand as the movie rolls along. If you're not as picky or critical of these things as I am, you'll have an even better time than I did and I highly recommend this to you.
Rating: ***1/2
Labels: movie reviews