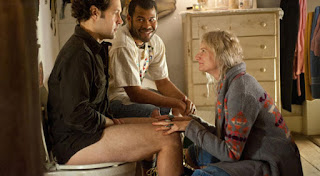 It's pretty much my gut instinct these days that if Jennifer Anniston is in a comedy, it's going to suck. Her track record with the genre speaks for itself. Normally I'm more than happy to completely ignore her latest picture and leave it to my wife on her chick flick movie nights with her friends. But after last year's Horrible Bosses, and Anniston's best performance since The Good Girl as a raunchy, sex starved bitch of a boss, she sparked some optimism in me concerning her career choices. So when Wanderlust came along, starring an always enjoyable Paul Rudd, who more often than not makes good choices, and directed by a guy somewhat affiliated with the Apatow brat packers, not to mention its hard R rating, I thought 'cool, Anniston is off and running with this whole raunch comedy career path.'
Wanderlust is one of those funny (not haha funny)  plots that's about as easy to swallow as a pint glass. Meaning right off the bat you've got two mega celebrities playing characters who are supposed to be broke and struggling. Living in Manhattan in an apartment they can't afford the size of my bedroom, and stressing about how they will afford to eat. The net worth of both of these people in real life could probably solve world hunger twice, so unless you're really good at pretending, the movie starts off asking a lot.
Through a series of unfortunate events (thank you, Lemony Snicket), these two find themselves pulling into a bed and breakfast type place run by a commune of hippies who share everything and don't believe in doors, or monogamy (hello, Manson family). Their first night there they get stoned and go skinny dipping and have a blast and following another series of circumstance, they decide to go back to the commune and 'try it out' for two weeks to decide whether or not to drink the kool-aid.
The plot follows the basic guidelines for the standard Hollywood comedy and no plot 'twist' (more of a curl really) will come as a surprise or a shock to anyone. Being a restricted comedy and being that it takes place in a hippie commune, there is gross out stuff, cursing, drug use and a shitload of nudity, but at least there's no scenes where the peak dramatic moment happens in the rain! Oh wait, there is.
Wanderlust is a movie I can see a lot of people getting a kick out of, I don't know what its Rotten Tomatoes rating is right now, but I'm sure it's fresh (that's good) and it made me laugh quite a few times. Paul Rudd and Jennifer Anniston are very Paul Rudd and Jennifer Anniston in it. They don't have a lot of range or versatility (especially Anniston), but they get the job done. There's some great supporting performances, most notably Alan Alda who, let's face it, turns every movie he's in's awesome dial up a notch, but excluding Justin Theroux, who's hippie leader performance annoyed the hell out of me for some reason.
The movie has no redeeming message or moral value, so don't go in looking for that, and its by the book plot structure induces boredom on more than one occasion, but if you're into something that aims for Horrible Bosses or, to a much less extent, Bridesmaids style comedy but falls short, then go for it. You'll laugh, you just might forget you saw it before you leave the theatre.
Rating: *1/2