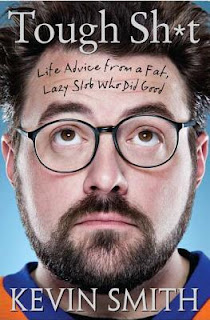 Some people, like myself, are the type who like to keep their life private. Keep their fights, their turn ons, turn offs, financial situation, sexual experiences, hopes, dreams..whatever, behind closed doors and in the privacy of their own home. Others, like Kevin Smith here, are an open book in every sense of the word. There's nothing about this guy's life he won't, or hasn't, shared. And with all the interviews, DVD and Blu-Ray (and Laserdisc) special feature work, previous books, speaking engagement Q&A tours and an endless array of podcasts every week, he has plenty of opportunity to share his deepest darkest feelings on any subject you like. I've never read any of his other books, but this is a split between his autobiography and a study of his films by him up to this point. From how he got into the business, to the making of every one of his films, to his clashing with Bruce Willis to his Southwest Airlines incident (Too Fat To Fly, remember?), to speaking on why his next film will be his last, to his very large and very successful podcast (SModcast) universe, to how he met his wife and his fondness for a certain unmentionable private area of hers (no not that private area..no not that one either, a very private area). He tells it all folks. Stuff you didn't know, stuff you didn't wanna know. But he's a very charismatic guide and a great writer (a viewing of any one of his films will tell you that) and he lays it all out in a way that had me up late on more than one occasion rifling through page after page. He tends to get pretty repetitive a little too often, but other than that I really found nothing I didn't enjoy about this book. It's an easy read and it was kinda cool for a reader like myself, who currently resides in Edmonton, Alberta, to read about Smith's love for hockey, his hero Wayne Gretzky and the Edmonton Oilers (referencing the 1980's version of the team as a holy grail in sports history). I was also glad he opened my eyes to what an udder douche bag Bruce Willis is, it's somewhat nice to know that cocksure cool dude attitude of his is what it seems to be, an inflated ego ready to pop like the pimple on that office employee's nose in Liar Liar. He also takes a chapter here and there to pay tribute to the likes of John Hughes and George Carlin, who's ten times nicer and more humble than you'd ever think he'd be.

Tough Shit is a film study, a life study, a cautionary and hilarious tale from a gifted voice and an outspoken fat supporter. A really fun time, but only if you're into this level of unguarded candour. It's profanity filled, sexually explicit at times and potentially offensive (especially if you're a Bruce Willis fan, which you won't be after this book) but in a real, very funny, very entertaining way. However, you also feel this Kevin Smith is a really good guy who has his ego in check, a touchingly deep love for his family and friends and a very un-movie starish quality about him. So then, just a normal, fat, everyday dude who happened to be in the right place at the right time and made good, as he says. I like that. I love this book.

PS- I bought the 'enhanced version' on my iPhone through iBooks which has a video introduction to every chapter from Smith and a few other guests, as well as his infamous Sundance Speech and a trailer for Red State. It's only $2 more and well worth the price of a Reese Pieces.
Labels: Book Reviews