I think we should split up 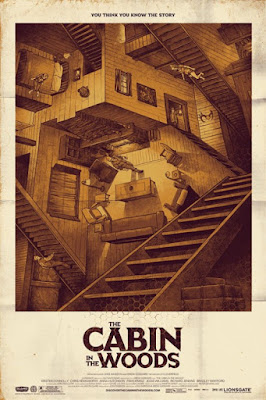 If you've never seen Scream, the seminal teen slasher flick from '96, this is how it goes in horror movies: Never say things like "I'll be right back," "Who's there?" or "Hello?" Don't drink or do drugs, movie monsters hate that, and for the love of God, if you're a virgin, STAY A VIRGIN, nothing will find you a shiny blade in your belly faster than spreading you legs. Although Scream doesn't mention it specifically, you will also usually find the following in a horror movie: A lug-headed, beer swilling jock who wears his lettermen jacket in every scene. A usually ditzy, blond headed, big breasted beauty. An intellectual, but usually still handsome, kind hearted boy who applies himself and is resourceful. A dumb friend who doesn't get a chick, may or may not be a pothead and is usually equipped with all the good one liners and finally the pure as winter snow, pretty but not gorgeous, shy virgin, who will always be the one to escape the horror of the film she is in.
Not only do these descriptions fit the kids in Cabin In The Woods, they fit most kids in most horror films with teen casts. Scream may have revitalized and even revolutionized the teen slasher genre, but teens have been getting bumped off in horror films (usually called 'Slashers') since the early 70's. So why the cardboard cutout cast of characters in this highly praised 2012 entry into the genre? That I can't really tell you. What I can say is that they are in it for a reason, which I also can't tell you, and that they aren't there by accident and that their character types serve a purpose, of which I also can't tell you. Frustrated yet? Try writing a review on a movie you can't talk about.
Pretty much since Hitchcock's Psycho (1960) there have been films with huge endings that, if spoiled, would greatly diminish the impact of the first viewing of the picture. The most recent example of this was 2010's Catfish: See it, don't tell anyone about it, and don't spoil it for yourself before you see it. Really you could say that about any movie (except Titanic. Jack dies), but The Cabin In The Woods is probably the best example of going in 'cold' hugely benefiting your experience. Obviously you can't go in completely cold, as trailers, word of mouth and the internet will make that pretty difficult, but you're not meant to, you're meant to know that a group of good looking teens go spend a weekend at a cabin and get brutalized by something evil while there. This anterior information on the film is the reason I initially shook my head and filed it under the 'been there, seen that' area of my movie mind. But then it came out, got great reviews and everyone said it wasn't what it seemed to be. Boy were they right.
The Cabin In The Woods starts off (for the most part) like a million other horror flicks and continues on in that way, aping, or paying tribute, mostly to the first two Evil Dead films.
But there is something else happening at the same time as the story in the cabin unfolds, something new and different in the horror film genre, and as this other something collides at different points with the kids' cabin predicament, and the plot thickens (it actually does) and more is revealed, you begin to wonder just what the hell it is you're watching here. And by the end of the film, you mouth is open and you are in awe of what has just unfolded. That's about all I can say about the plot. What I can say about the experience is that the final twenty or so minutes of this film may be the most chaotic twenty minute stretch of movie I have ever seen.
When MGM went bankrupt during the financial meltdown a handful of films went into movie purgatory, this one was one of them. Made in 2009 and ready for release that same year, it finally got sold to Lionsgate last year for $12 mil, came out this month and made 14 in three days. Pretty good use of cashola on Lionsgate's part if you ask me. It probably helps that in the interim Chris Hemsworth has become a superstar thanks to his turn as God of Thunder Thor. But the huge paycheque for Lionsgate isn't just Thor's doing, it's the result of a truly unique film going experience in a genre that badly needs it. It's a tribute to and revitalizing of some of the great horror films of the past and it's something that seems to come slapped with a 'cult classic' sticker right out of the box.
If you're a horror fan or looking for something different (and don't mind a bit of gore..actually a lot of gore) then see this puppy, preferably on the big screen.
Rating: ****
Labels: movie reviews poster of the week