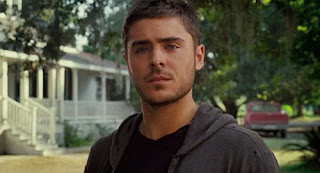 So this is how these movies get greenlit in Hollywood:

Assistant: So here's the rundown for today,

Assistant: Your suits need to be picked up from the cleaners, your son called and asked if you know where the remote went, you have a lunch date with Spielberg, your wife called and your dog has cavities again, Scott Hicks wants to make a romance with Zac Efron, your favorite sandwhich place closes early today so you need to order your lunch at eleven instead of twelve, and your car got ticketed for parking in a red zone.

Studio Head: My car got ticketed again? Aw! They told me I was okay to park there last week.

This can be the only rational explanation for why and how a movie as unoriginal, and just plain bad, as The Lucky One can be afforded a budget of $25 million (yes, I checked) and given the go ahead by the movie studio powers that be. I understand completely that there's a market out there for this particular brand of sugar-cheese and there will always be an audience for it, but throwing something like The Lucky One together and passing it off as entertainment for anyone is an insult to the moviegoing public.

The story is so simplistic and silly it's not really worth mentioning, but hopefully you won't be put through this yourself so I'll give it a quick rundown:
A U.S. Marine is in Iraq and finds a picture of a blond beauty in a random cave or something and survives ordeals he probably shouldn't have and gets back Stateside determined to find the girl in the photo 'who kept him alive.' With outrageous ease, he does! She's just a couple states over, running a dog shelter. The Marine walks there, walks (because he likes to), reaching her looking like he just stepped out of a Calvin Klein ad, despite walking nonstop through two states and uses his innocent sweet boy charm to woo her grandmother and gets hired at the shelter. Now where do you think the story goes from here? Do you think the Marine is: a) Terrible with the animals at the shelter, needing a great deal of patience and help to understand the finer points of caring for dogs, or b) God's gift to dogs, bonding instantly with every animal there and doing nothing wrong. If you guessed 'a,' you're incredibly optimistic. No it's 'b.' The Marine and the photograph woman begin to hit it off, much to the chagrin of her ex, who is, yes, abusive, possessive, jealous and cruel and a police officer to boot! They have a son together, who the ex uses to threaten the woman with taking away until she decides to start standing up for herself and so on and so on and the sex scene takes place in a shower, fully clothed, and the dramatic apex takes place in the rain and the final 'wait, don't go' moment takes place on an endless highway with the sunset bathing everything in a Christmas orange.
There, now you've seen it. And those aren't even the cheesiest parts.

You know when you're in a theatre watching a romantic drama and there are always a few scenes that are so silly and cheesy that everyone snickers, or outright laughs at them? Just about every romantic movie has them. The Lucky One is a movie made up solely of those moments. It's like the writer of the film sat down with a pen and watched a boat load of romances and every time a silly, head shaking moment happened, wrote it into the script. And to add the heft needed for such an undertaking, wrote characters that are cardboard cutout sterotypes. Like for instance, the quiet, sexy Marine with a heart of gold and a pretty unconvincing case of PTSD. Or the angelic blond who is a perfect mother to a perfect child who married a monster she fell in love with in high school while he was the captain of the football team. Or the fat, rich, town Mayor who is the only one in the film that has an accent, one of those fat, political, Southern accents you hear in your head when you're reading a John Grisham novel. Oh yes folks, this movie's got it all, including High School dancer-prancer Zac Efron. Who in place of acting throughout the film just stares at the camera a lot, again, looking like a magazine ad. See that picture up there at the top of the post? Look at it for two full minutes. Do that about every eight or nine minutes for the next hour forty-five and you've just directed Zac Efron in The Lucky One.

Despite my obvious utter lack of enthusiasm for this particular film, I still don't believe in spoilers, I adhere to the moviegoers version of the Mafia's code of silence, even when the film doesn't deserve it, so I won't tell you the ending, but I will say it is one of the worst, silliest endings I have ever seen. Wrong on just about every level, including morally. Which means it's a perfect ending to The Lucky One, which is one of the worst films I have ever seen.

So if you're looking for a movie that from beginning to end is a complete compendium of the cheesiest and most cliched bits of the romantic genre pieces that have come before it, look no further, for The Lucky One just might be your number one movie of 2012.