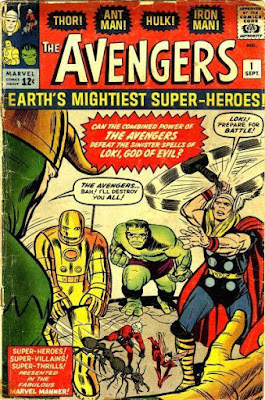 The first one happened at around the ten minute mark. Then again at about the twenty minute mark, then the thirty, the forty-five, hour, hour fifteen, hour twenty, twenty-five, thirty, and so on in, at most, five minute intervals till the end of the movie. Was this how many times The Avengers joined forces? Or the times Tony Stark said something sarcastically pig headed and witty? Or the times that the Hulk, um, smashed? No, this was how often a parent had to take a crying or bathroom needing child out of the theatre during my six o'clock showing of The Avengers. The theatre was about two thirds full and at least half of those patrons were kids. Small kids. Kids my son's age (four). I was one of those parents, having to take their child out to use the little boys room. Which brings me to my first point and first point of praise, and contention, as far as this super huge superhero movie is concerned: In some ways, it's great for kids. A whole bunch of superhero's fighting baddies in huge, boom-bastic ways, violence without the blood, action without the gore. On top of that, not a swear word to be heard or a silly love story element leading to scenes of mushy and cootie filled kissy kissy huggy huggy stuff that has no place in a little boy's imagination, except as something to rebel against.
And while that's all fine and good, the movie's length is trying on anyone under the age of thirty. At two and half hours, those of us with less than exemplary attention spans get a little fidgety, especially during the scenes of detailed explanation for why the bad guys are posing the threat to earth in the first place. Luckily all that comic book geek talk is for the most part dispatched with in the first half of the movie, leaving the second half to take care of the action and special effects.

I watched the original Godzilla yesterday before I went to Avengers. Godzilla came out in 1954 and didn't have the budget, even at that time, for top of the line special effects work, but the effects it did have were about as good as you could ask for in the mid 50's, which is to say, completely fake looking, obvious and cheesy. It's a great movie though. But to go from that to The Avengers, with it's 2012 top of the line CGI and fifty-eight years of effects evolution is akin, in the movie world, to going from a slum in India to Carolwood Drive in Beverly Hills. In The Avengers, when the action hits, it hits hard. A slam bang punch in the chops which is often chaotic and the screen always filled with more to see than you have the ability to. The effects themselves are seamless, look as real as your fingernail and are often on a scale of such enormity, it's a little baffling. Pretty impressive considering the whole thing was directed by a guy who had mostly only done television.

Joss Whedon has an army of his own. He's a veteran television and movie writer who's been around since the late 80's, when he wrote a handful of episodes for the show Roseanne, when it was in its heyday. He also wrote the screenplays for Toy Story, Titan A.E. and the original Buffy the Vampire Slayer, which he later turned into a very successful television series. His list of credits goes on and on and is, for the most part, pretty impressive. He also wrote the script for the most original horror film in as long as I can remember, this year's Cabin In The Woods. So while letting him direct The Avengers might have been a leap of faith Paramount's part, letting him write it certainly wasn't.

Having all these hero characters, most of them coming off their own successful films, in one movie with the bad guys and the supporting players, and Sam Jackson, one has to wonder how the filmmakers will pull it all off without things feeling crowded (or the movie being five hours long). After all, even The Dark Knight, still a better film overall, was starting to feel a little congested by the end. And next to the smorgasbord of top notch effects, this is the most impressive aspect of The Avengers: It never feels crowded at all. Each character is given an equal amount of importance and of things to do. Whether they're fighting baddies together (or fighting amongst themselves), or off doing their own thing, the story weaves in and out between them seamlessly, never favouring one over the other.
The acting is pretty great as well. With the exception of Mark Ruffalo and Jeremy Renner, all the actors here have had a full movie (or two) to get used to the characters they're portraying and all seem pretty comfortable in their respective spandex. Ruffalo is the third actor to take on the Big Green, a character that is becoming as diversely portrayed as Batman, and by far the best. The Hulk is also the most interesting facet of group, Whedon building the suspense of the character in bits and pieces until when the Green is finally uncaged, it's pretty intense.

I've never read a comic book in my life the whole way through. I just never got into them. So I had absolutely nothing emotionally invested in these characters before I walked into the movie and to tell you the truth, I still don't. The movie didn't make me want to go out and watch the stand alone movies again, or buy some Avengers comics, or even roll my windows down, close my eyes and drive my car really fast along the highway and pretend I'm Iron Man bullet-ing through the skies. It did impress me as a well written, well acted, fun movie that starts off a little slow and maybe could've picked a somewhat more menacing bad guy, but when it kicks into high gear and the action starts, it's some of the most intense, impressive action this side of a care bear countdown.