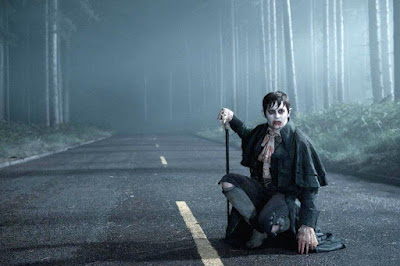 Dark Shadows is a strange beast, there's no two ways about that. A hodgepodge of genres and plot lines weaving in and out of each other, it's at once funny, scary, violent, angst-y and yes, altogether ooky. It's a Tim Burton film, which these days has meant a weak plot and silly script buoyed by solid direction and beautiful, otherworldly set design and colour schemes, though this script was much better than the last few have been. It also means a front and centre performance from Johnny Depp flexing his versatility in a role on some level of the macabre.
This time he's a vampire, made so after a witch does away with his true love and thwarts his suicide attempt to join her by damning him to an eternity of blood thirst. To make matters worse she buries him in a coffin in the ground, bound by chains, so he can spend his eternity thirsty and heartbroken in the endless dark. Harsh. Many years later, in the films most violent scene, almost shockingly so, he emerges and now must come to grips with living in modern times (the films modern times, which is the 70's), while having to deal with that pesky witch who cursed him in the first place and who's still kicking around.
If not for genuinely creepy scenes of tortured ghosts haunting creepy old houses, the aforementioned violence and the number of times Depp's vamp brutally offs people throughout the film, the story would be ripe for a fish out of water comedy as Depp adjusts to the 70's. As well as to his descendants, who are now living in his palatial home and between them have any number of psychological idiosyncrasies including, most frighteningly of all, Chloe Grace Moretz's teenager who is going through puberty. I grew up with two sisters, believe me when I say, that is truly chilling.
Burton and his scripter Seth Grahame-Smith, who wrote the books Pride and Prejudice and Zombies and Abraham Lincoln: Vampire Hunter, as well as the bible story twist Unholy Night, do pluck the displaced vampire turkey fairly clean, leading to some of the cheesiest bits as Depp tries to understand the workings of a TV and riding in cars over horses. Not surprisingly, the film does best when chaos sets in. Depp's brutal killings, a ghost who appears to kids and then kills itself night after night, and the completely bonkers finale don't fit with the middle, more lighthearted parts of the movie, but are some of the best bits and reminded me of Burton's more accomplished offerings like Sleepy Hollow and Sweeney Todd.
Depp is great in the role, he's always great, but so is the supporting cast. Michelle Pfeiffer plays the stuffy patriarch with aplomb, reminding of why she is a star while making me wish she worked more. Chloe Moretz is fantastic, smelling like teen spirit and moody rebellion, adding another in a long line of perfect performances. She is, bar none, my favourite actress in the movie business right now. Burton's other partner in crime (and life) Helena Bonham-Carter is great giving a performance closer to her King's Speech character than her Harry Potter one.

I've never seen the TV show this was based on. From what I've heard, it's really bad, maybe a so bad it's good situation to its fans, so I don't know how faithful Burton was to its legacy, if it even has one, but Dark Shadows, for the most part, worked for me. It looks great, is diverse and see's Burton letting his mad scientist looking hair down after having it up in that tight bun that was Alice in Wonderland. A return to form then? Pretty damn close, anyway.