The good guys dress in black 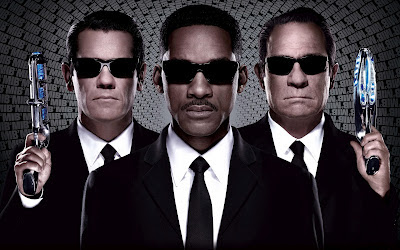 There is a (mostly) unspoken debate in movie critiquing: Should we judge a movie sequel, or prequel, on how it holds up to its predecessor(s), or judge it of its own accord, its own ability to entertain? As far as I'm concerned, the most obvious answer should always be, judge it as its own movie. Who cares if the movie before it in the series was better, or worse. If such and such 2 or 3 isn't the blast 1 was, but is still a blast, that should be all that matters. Men In Black 3 (or III, if you're of a When In Rome mentality) is a mostly liked but unfairly disliked, addition to this debate. Peruse Rotten Tomatoes and you'll find that 68% of critics gave it positive reviews. Of the other 32%, most of the complaints arise from unfair but inevitable comparisons to the first movie. Men In Black 3 features a tonal change that leans away from its previous comedic drive and towards a more serious and emotionally sappy one. This has pissed many people off. People that went in to Men In Black expecting to laugh and have the good time they had the first time around, and instead didn't laugh, or not much, and maybe even teared up a little by the end. What's going on here? I'll tell you what's going on here, stop going into movies expecting something specific and you won't be disappointed coming out.

So does Men In Black 3 (I refuse to type in acronyms if I can help it) bear any resemblance to the first two? Well yes, in fact in fits in rather nicely with the first one especially. The aliens, the effects, the space guns, the suits and shades, all there. There are a few attempts at humour, most of which fall flat on their face, and there's certainly a lack of emphasis or even a discernible effort being made in that regard. Instead Willie & Co. have dedicated their movie-magic wands to creating a more intricate storyline and broadening the scope. In this case, the scope broadening into Agent J (Will Smith) time travelling to the 1960's to save Agent K (Tommy Lee Jones) as his younger self (Josh Brolin) before a nefarious alien baddie called Boris the Animal (Jermaine Clement) has a chance to go back himself and take him out, thus saving the arm of Boris' K blows off shortly thereafter. There's also a plot within a plot involving a tiny galaxy which must be returned to its rightful place or death to all humans, and so on. It's a little confusing on paper (or computer screen), but one of the strengths of the movie is that its laid out in such a way that isn't confusing in the least. There's nothing worse than trying to keep up with what just happened in the last scene of a movie while the current scene is already in motion. Time travel is a tricky thing to pull off in movies and Men In Black 3 does a fine job.
Which bring us to 3's most highly praised aspect, that of one of the great screen imitations ever put to celluloid (or a hard drive as the times would have it): Josh Brolin playing Tommy Lee Jones playing Agent K thirty some odd years before the events of the first Men In Black. There was a ripple of controversy regarding Brolin's performance as some media jokers started some stupid rumour that Brolin had all his lines overdubbed by Jones himself. Anyone who actually watches the movie can see that, as inspired and flawless as the performance is, Brolin is delivering his own lines. But that's just a confirmation to the greatness that is his take on Jones. It's not just the way he talks though, facial expressions, even the way he walks is exactly like Jones. It's pretty amazing. And a good thing to, because the chemistry between Smith's Ying to Jones' Yang has always been the series' strongpoint.
Smith and the real Jones, for their part, are less than impressive, I'm sorry to say. Smith has an undeniable charm and charisma that makes him damn near impossible not to like and Jones, his characters usually almost as grumpy as he is himself in real life, is one of the finest actors around. But here they both seem...tired. Or distracted maybe, I don't know. But the energy that could be found in their performances in the last two Blacks is missing. Smith especially is a little lacking in that Smith twinkle and charm. Jones can be forgiven for acting (pun intended) his age and slowing down a bit but maybe Smith has spent too much time away from comedy and the energy that requires. Or maybe he's just getting old. That's not to say they're horrible or looking at their watches waiting for the movie to break for lunch, and the chemistry's still there, it's just a little watered down this time around. Jermaine, for his part, is inspired casting and despite being almost unrecognizable in prosthetics and various other makeup effects which I can only guess would've taken a normal workday's hours just to apply, gives a performance which shows a versatility that thankfully guarantees he will be gracing cinema screens for quite some time.

A funny and very cool thing dawned on me as Men In Black 3 was wrapping up: This is a movie which is both a sequel to the first and second instalments and a prequel, segueing quite smoothly into the first Black and adding a depth and dimension to the relationship between Agents J and K which I found quite moving. But fear not, for the sci-fi action and special effects, the threat to our very existence and further assurances that we are not alone are fully intact. This is not Pride and Prejudice and Aliens, or Little Women and Big Willie, this is Men In Black 3, with bad jokes, a great story and the best celebrity impersonation since Maya Rudolph as Oprah made Amy Poehler's head explode when she informed her it was her biiiirrrrrthhhhhdayyyy on an SNL parody of the Oprah show. Men In Black 3 just isn't afraid of a little heartstring pulling along with it.
So did I shed a tear for the cornball ending? No, there was popcorn grease in my eye.