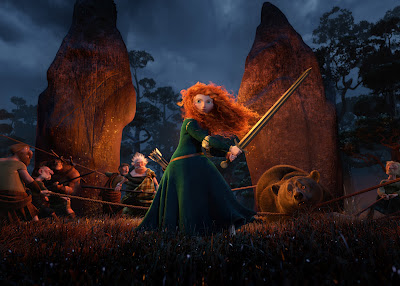 Disney and Pixar have always shared a certain amount of DNA. Pixar honcho and spokesman John Lasseter has said that the Disney masterpieces have always had a huge influence on Pixar, even before the former bought up the latter in a bit of company take-over ingenuity. But the Pixar films have also had their own flavour, their own feel. They've had a little more heart, a little less cheese, more audience wide appeal, and the songs in Pixar films are in the background of the action, rather than being sung by the characters. Brave is the first outing at the company currently known as Disney/Pixar that looks and plays like equal parts Disney heyday and Pixar current. And that's not just because it's the first Pix to feature a strong willed princess in the lead.

I guess you could say Brave is first Pixar that doesn't really feel like Pixar. The animation giants have always been easily discernible from their Sony or Dreamworks Animation Studio rivals. The quality's been higher, in animation at times but more so in story. Pixar has, with very few exceptions, been able to weave that magical ingredient that allows a film to appeal to all ages equally. It really didn't matter what age you were when you saw Toy Story 3 a few years ago, you loved it. Unfortunately I wouldn't say the same for Brave. I think it has things that will appeal to and entertain a large audience, but not at the same level as some of their more prestigious works.

Brave's tone is quite different for one thing. It's more slapstick, more goofy, less emotionally dramatic. Oh there are scenes of sadness and longing, broken hearts and regret, not to mention a healthy dose of peril (healthier than most animated films even). But Brave's biggest weakness, which, along with Cars 2, almost shockingly makes Pixar two for two in this regard, is in its story. The story of Brave is overly simplistic. The quest of Merida, Scottish princess and symbol of teenage rebellion and independence, almost makes one wonder how they found enough filling to make this particular movie pie as fat as it was, length-wise. The resolution of the quest is also simplistic to the point of befuddlement. Forgot your thinking cap at home? Not to worry, you won't need it for this one, you'll still figure out the answer to Merida's quandary long before she does. Finally the happy ending moment (oh please, that's not a spoiler, this is a Disney film), has almost note for note been lifted from a previous 'Disney masterpiece,' further highlighting the connection.

That's what I didn't like about Brave. Thankfully for all, there's still much more to like in Brave than not to. First and foremost, it may be Pixar's most beautiful looking film. From the rollicking Scottish highlands to the intricate weaving in the plaid fabrics to the unbelievably detailed animating of Merida's long, flowing ringlets and how realistically they interact with the things they come in contact with, even in the slightest ways, Brave is photo realistic in a way no Pixar film has been before. The characters themselves of course still may look very much spurious but all in all this film is gorgeous.
The story, despite its simplicity, is still a lot of fun. From the magic to the danger to the ruckus, Brave moves fast and, as I mentioned, has cranked up the jokes and the slapstick to make it feel silly as much as it does serious.
It's also got some great characters, as every Pixar film does. Merida, voiced by the lovely and always cute as a button looking Kelly MacDonald, is a princess not unlike her pencilled, 2D counterparts, fighting for her independence, causing grief to her mother, uniting her kingdom when duty calls. Her mother is the most boring character, but a necessary one, prim and proper and very Queen-like. She gets a little more interesting later on though. Merida's father and his clan leader cohorts are a lively, hard living, hard partying bunch of tree trunks who act in the unruly and unrefined way your mother's warned you about. Needless to say they were the funnest characters and the ones I'd most like to spend a weekend with. There's also a witch who is the picture of witchery stereotype and three rascally triplet brothers who are fun to watch but would give me a multitude of ulcers if I was their parent. And how can you have a Disney princess without her best bud and trusty steed, galloping off together on adventures and excitement. Thankfully this horse doesn't talk, that would be a little much.

I personally loved Brave. It wasn't especially well written and exists in the lower half of the Pixar cannon, but it's a lot of fun, is drop dead gorgeous and even feels a touch grittier than the little Lamp's films have before. Plus your kids probably won't have the squabbles that I did, so take them to it. You could do worse for a family night activity. Like that Justin Bieber special on NBC.