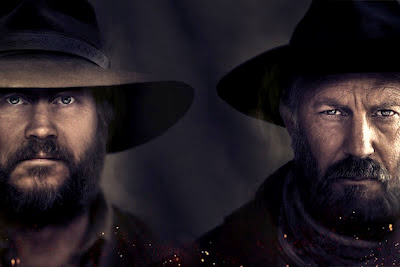 Civil War, 1863. Devil Anse Hatfield is about to make his escape into the night, away from the fighting, away from the bloodshed, back to his wife and a more peaceful existence chopping lumber in the hills of West Virginia. Randall McCoy, a close friend and comrade of Hatfield's, awoken by the rustling of Hatfield's exit, confronts and tells him not to go or he will be a deserter and a coward. Hatfield pulls his gun and leaves anyway. And so the seeds are sown between the families that will, in a bitter twist of irony, see Hatfield with more blood on his hands, more bitter warfare than he ever saw fighting the 'blueback Yankees' in the war.

Hatfields & McCoys is based on the true story of the warring families that took place at the end of the nineteenth century. While the exact details of what initiated the feud in real life are a little sketchy, the miniseries pinpoints it back to the bloody battlefields of the civil war, and then to the murder of a Hatfield by a McCoy.
The series is only three episodes in length, but at over and hour and a half each, we're given plenty of time to get to know both families and some of the more influential members of each. Kevin Costner and Bill Paxton play the heads of each family and give performances which are near revelations into the calibre of each of their talents. I've always liked Costner's acting, though not always liked his films, and he keeps getting better every time I see him. Paxton on the other hand, I really disliked at first and couldn't understand why anyone would hire him. But after a string of strong performances won me over in films like Club Dread, Frailty and Big Love, I've changed my mind about him and his work in this series is the best stuff he's ever done.
The series is directed by Kevin Reynolds, who made the great Robin Hood: Prince of Thieves with Costner, and the embarrassing Waterworld with him as well. He does a great job here, taking obvious cues from the visual palate of Deadwood, creating a gritty atmosphere without an abundance of flash.
The series starts off a little slow, the first episode taking time to establish the feud and the characters that will populate it. It soon picks up though and the entirety of the second and third episodes are relentless action and suspense as causalities big and small (literally and figuratively) start to pile up on both sides. This is where Paxton's true colours shine, as every family member lost, or toll taken on his family chips away at him bit by bit until there isn't much left of him but a shuddering, weathered, exhausted wreck, broken and blood thirsty for revenge.

This being a History Channel presentation, you won't find some of the trademarks of gritty HBO shows like constant swearing and sexuality/nudity throughout. The swearing here is kept to a minimum and the sex is implied. It does not, however, shy away from violence, much to its own reward. This was an intense, brutal war that claimed many lives in many ways and to tone down or shy away from that aspect would only hurt the intended effect.

At four and a half hours, Hatfields & McCoys could be taken in one massive gulp by those with an afternoon to spare, or in parts, it really doesn't matter. It's an HBO or AMC quality miniseries that, regardless of how accurate it stayed with the true story, makes for some damn fine viewing and is a further indication of the entertainment value and production excellence of story arc television these days. Excellence that more and more is beginning to surpass the best the big screen has to offer on any given year.