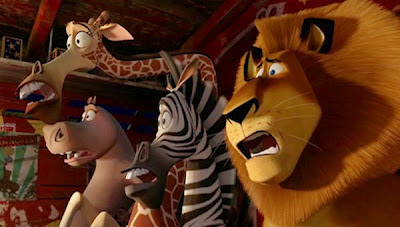 The trickiest thing the makers of family films face is striking that perfect balance between giving the kids what they want, while making the film fun for the parents as well. Too much or too little of one or the other ends up with one of the demographics scratching their heads or getting poked in the ribs by their kids because they've started to snore.
The Shrek films, especially the first couple, are great indicators of films that pined too hard for the parents vote, sending most of the jokes flying over their kids' heads.
On the other hand, movies like last year's Winnie the Pooh revival was perfect for kids, but held little for their mom and pops, except perhaps nostalgia.
Pixar is the obvious king of the ring for movies that appeal to all ages and seem to have the balance down just right. But Dreamworks Animation has been nipping at their heels for years with great movies for all ages like How To Train Your Dragon, Megamind, Kung Fu Panda and the Madagascars.

Madagascar 3 continues the series' fish out of water story found in the first two, with that particular brand of slapstick humour that has served the series so well, but has found its groove here in both respects better than ever before.
This chapter continues on exactly where the second one left off, with the animals of the New York City Zoo displaced on European soil. An exotic animal hunter Captain DuBois, who looks exactly like, but for some reason is not voiced by, Helena Bonham Carter, is hot on their tails (pun) wanting their exotic heads for her trophy wall, and to escape they sneak themselves into a troupe of circus animals, which coincidentally are making their way to New York City. Hilarity ensues.

The movie actually is quite funny, the humour very physical and chaotic, owing as much to The Three Stooges as to Russell Peters. The story's pretty ridiculous and not in the least surprising, following the family film blueprint of the three act arc quite faithfully. This is a family film made mostly for kids though, don't go see it if you're not willing to be forgiving on these matters.

As with almost every computer animated film that comes down the pike these days, the movie looks fantastic. The colors pop like a fat kid sitting on an over inflated balloon, and the European landscapes are pretty breathtaking on the big screen, looking better than they probably would in real life. I didn't see the movie in 3D (my kids hate wearing the glasses). Which is just as well as 3D is becoming that annoying guy who lives a few doors down that drives a big noisy truck and revves his engine at one in the morning thinking he's so cool but that everyone wishes would just move the hell away already. There were many moments that you could tell were tailored for maximum 3D effect though.

Madagascar 3 takes what worked in the first two movies and nearly perfects it this time around, with better jokes, better animation and more chaotic action. It keeps the story simple, silly and predicable, which is just about where it should be for kids. It's maybe not something I would watch on my own, and doesn't reach that Pixar bar, but as something to take your kids to you'll both get a kick out of, it's a good time.