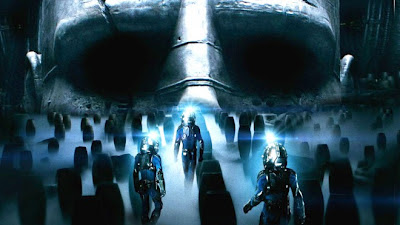 Prometheus starts with Planet Earth like shots of rolling, rocky highlands, bubbling streams and pounding waterfalls. It all looks very beautiful. And yet there's something strange about it. Something's off.  The color's a little too drained, the scenery a little too cold. It's all a bit ominous.
The reason for the off kilter expression of scenery is made clear a moment later, though I obviously won't say why. But it sets up quite perfectly the feel and the atmosphere that will follow throughout the rest of the film.

Prometheus is a prequel to Alien. There's been some nonsensical debate as to whether this is a misnomer or not. It isn't. Prometheus takes place before the events of Alien and within the same narrative universe. It also, in little but powerful ways, directly references that movie. That makes it a prequel. But, to the great displeasure of many an Alien fanboy,  Prometheus is very much its own movie, rather than existing solely to inform the events of the '79 flick.
This film poses some big questions throughout, some of the biggest human beings have ever asked. It introduces us to a cast of characters who are on an intergalactic quest to answer them and as much as they discover, we discover. The film lets us know only as much as they do, which leads to many questions asked and plot points presented going unanswered. This will be frustrating to some, especially if you're the type of filmgoer that likes everything tied up into a pretty bow by the end of the movie. But it didn't bother me. This happens in life all the time, things pop up in our personal plot lines that end up going nowhere or leaving us confused. It's nice to have movies sometimes that dare to dangle carrots without ever letting us sink our teeth into them. Besides, movie head scratching leads to some of the best conversation starters in face to face social interaction.
Don't get me wrong though, Prometheus isn't hard to follow. The main narrative objective of the characters is clear and follows a steady path, it's not disjointed or as abstruse as, say, The Tree of Life. The perplexing aspects are deliberate and enhance the alluring mysteriousness of the film and the universe in which it exists.
Prometheus isn't as hard edged or shocking as Alien, but it never goes very long without some kind of intensity or peril overcoming one of the characters.  I wouldn't call it a horror film per se, but it's certainly a thriller.
Being that this is a Ridley Scott film, and being that Scott is one of the best users of special effects and directors of action scenes around today, this puppy is chock full of truly amazing visuals. The scope of the ships and the planet the characters are on is massive. There are a great deal of effects shots in the film and there is not a single one of them I didn't buy as reality. There's a sequence towards the end which appears briefly in the trailer that is so huge in size and ambition it almost literally blew my head apart. Okay not quite, but the visual aspect of this entire film is worth seeing it for in and of itself. And for the love of God folks, see it on the big screen. As big as you can. IMAX big.

I want to mention quickly the acting. There's lots of great acting in this movie. Most of the cast is top notch. Michael Fassbender though, is the standout. It isn't a spoiler to say he plays an android who has a pivotal role in what happens to the characters. What that role is, is a spoiler. But Fassbender is perfection playing this character. The way he talks, the way he walks, the way he moves his face. You're not watching Michael Fassbender, one of the busiest and most famous male stars of today, you're watching a robot that's dressed up to look like a human. Once again, I bought every minute of it. It's a performance that could score him an Oscar nom. It won't, this being a sci-fi popcorn actioner (by appearance only) and coming out in the first half of the year, but it's worthy of it.

I'm going to go out on a limb and say that I think Prometheus will, in the years ahead, come to be recognized as a near masterpiece. It's not got a great deal of enthusiasm about it now, but I think that's the result of people not knowing what to make of it, combined with expecting something of it and then getting something else. It needs time to settle, time to be reabsorbed and appreciated. I saw it twice and the mysteries were made no clearer the second time, but, again, that's part of its strength. This is one of the best movies of the year so far and a grand big screen experience probing the mysteries of life and the origins of our species.
Plus, it sets itself up quite nicely for a sequel. Maybe they could call it Alien.