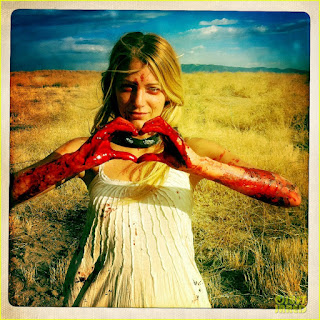 Savages is basically Oliver Stone slapping everyone in the face, saying 'I'm still here, still able and willing to make subversive, violent, hardcore movies about scary people. Either you'll dig it, or you won't.'
Savages is closer in tone and content to the wild abandon of Natural Born Killers and the psycho death dream of U-Turn than the more serious (in Oliver Stone terms) button down fare of late like World Trade Centre, W. and Wall Street 2. But as close as Stone sticks to the shadows and absurdity of political tales, he's always got a good hard R drugs and desert story in him waiting to come out.

Savages starts off by letting the audience know that any traditional moral compass they may have gripped firmly in the palm of their hand does not translate to the world in which his story takes place. He lets us know this by having our narrator (Blake Lively) let us know that that man (Taylor Kitsch) she's having fairly hefty sex with on the screen there is her boyfriend, an Iraqi war vet, a beach bum, a drug dealer. Another man (Aaron Johnson) who will be coming home soon is also a drug dealer, also a beach bum, also her boyfriend. The three live together in a sort of reverse polygamy type situation where the boys share the girl, oddly, almost impossibly, without any kind of jealousy or complication and the girl justifies it by saying both of them equal 'one perfect man' to her. Okay.
The boys grow weed from seeds that Kitsch's character smuggled back from Afghanistan. The middle east's ganja, according to the film, being the best the world has to offer. So now with their own special brand of tender love and care, the boys' weed has become the best in the west and they are in high demand. Such high demand that they curry the attention of none other than the Mexican Cartel themselves, a more ruthless batch of wheelers and dealers there probably isn't. Beheadings, immolation and other gruesomely inventive forms of torture all part and parcel of their weekly nine to five. You see a whole cross section of their methods in Savages. Luckily for the boys, they have a corrupt DEA agent (John Travolta) on their side to help keep them from harm(?) As the Cartel sweeps in to capitalize on the boys' revenue and product by making them an offer of partnership, things get complicated when the boys inform them that they are actually wanting to get out of 'the business.' This is not what the Cartel wants to hear. Lively gets kidnapped, the boys get desperate, chaos ensues.

The plot was initially a little hard to keep track of as the movie rolled along, but a real strength of the story is that with every layer added to the plot, things get clearer and ironically less jumbled. The story is buoyed by what we're given to look at. The small beach havens of Southern California are some beautiful places and Stone's lush photography and a boost of colour saturation makes them pop and burst to mouth watering effect. Anyone familiar with Stone's work, especially the aforementioned Killers and U-Turn, will know that he is a filmmaker who likes to play with the visual aspect of his films: some black and white in this shot, some grain in that one, here we'll insert a quick shot of an old Virgin Mary statue, and so forth. They will also know that his most brutal and violent movies take place, as many violent films do, in the desert. The desert representing a bleak wasteland where the heat and the aridity of it make crimes disappear and wash sins away. In fact, you could call Savages the third part in his desert trilogy. It's a landscape he knows well and it provides the stage for the best scene, and one of the most exciting, adrenaline spiking scenes I've seen in a long time, at the very end of the movie.

Savages is, as are most Stone films, host to a big cast of stars who for the most part do a great job. The three mainstays, Kitsch, Johnson and Lively, fit the bill as young, sexy little beasts who exude that Southern California flavour. Lively is not only the main gal but also the narrator, and she does a great job. Kitsch is okay but isn't a very strong actor and they could've found someone much better for his role. And if you're only familiar with Johnson from his role as Kick-Ass in Kick-Ass, he will be more or less unrecognizable to you here, not only in sight but in acting style. The versatility this kid has shown in Kick, Nowhere Boy as John Lennon and this, makes me very excited for his future, he's got some serious talent. The rest of the cast are great as well but it's Benicio del Toro and John Travolta that steal the show. Travolta is in tip top form as a slimy, crooked DEA agent, reminding us why we fell back in love with him after Pulp Fiction in the first place and del Toro, the actor's actor, is truly terrifying as a Cartel enforcer. The main difference between these guys is that with Travolta, you can tell he's acting, he's hamming it up and doing a damn good job of it. With del Toro, you completely 100% believe he is that monster he's playing on the screen. To say he's a naturalistic performer, especially here, is an understatement. It's a little early and the film's too violent for it to be considered anyway, but 'Oscar nom' springs immediately to mind when his reels hit the projector.

At this point it probably doesn't need to be said that if you don't like blood and violence, heavy swearing and/or sexuality, you should skip this one. Stone isn't half assed in anything he does, detractors be damned, and when he turns up the heat in the oven, he burns the fish sticks.
But if you're okay with, or indifferent to Stone's more indecorous filmic attributes, especially in the service of a great story and fine performances then by all means, check this appropriately titled puppy out.