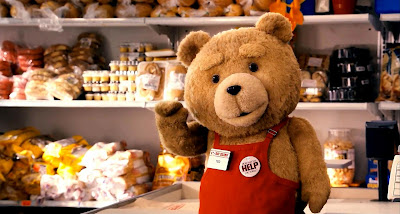 Cute and cuddly, that's what Ted is. A tubby little cubby all stuffed with fluff. Not unlike Mr. Pooh himself. And like old man Winn, Ted can speak, magically able to interact with the world around him and in particular his owner and best bud, with whom he goes on many adventures. The difference between Winnie and Chris' adventures, and Ted and Johnny's, are that Winnie and Christopher Robin's activities don't involve sitting on the couch watching TV, smoking pot, cussing up a storm and drinking beer. Unless they engage in those pastimes in between storybook pages that is.
No, if Ted invited Winnie over to hang out with him and a gaggle of gritty hookers, it's probably safe to say Winn would keep himself within the safety of his beloved Hundred Acre Wood. Tigger would probably go though, that cat's crazy.

The simplest and most direct advice I can give you on whether you should see Ted or not is this: If you like Family Guy but wish it was a little raunchier and less restrained, you will love Ted. If you hate or are indifferent to Family Guy and find it offensive, you will hate Ted. I'm almost certain that even the music in Ted is the same as the music they use on the show.
Ted was written and directed by the Family Guy and American Dad creative big cheese Seth MacFarlane. MacFarlane is also the voice of Ted, which is a slightly less fat sounding version of the voice he gives to the Family Guy himself, Peter Griffin. I'm not as familiar with American Dad, except that it's inferior to Family Guy in the way that Futurama is inferior to The Simpsons. I have seen most of the Family Guy series up to the last couple seasons though and Ted is, probably not surprisingly, the exact same kind of humour: crass, politically incorrect whenever it has the opportunity to be, unsympathetically and unapologetically offensive to as many people as it can be. The big difference between Family and Ted is that Ted doesn't have network sensors to worry about or work around. This isn't good for MacFarlane's abilities.
Love them or hate them for it, one of the great strengths of the Family Guy series is their innovation and creativity in making the show as crass and offensive as they do, getting the jokes in they do, while also getting them past the same censors that originally canned the show because of them. Instead of straight out cussing or calling someone a racial epithet, they have to come up with more creative and sometimes ingenious ways of insulting people, their cultures, sexual preferences or illnesses. Sometimes all at the same time. Ted has the opportunity to bypass this ingenuity by slapping itself with an R rating and saying whatever it wants about whomever it wants, and it ceases it. Don't get me wrong, Ted has some funny jokes, jokes I still find myself chuckling to days after seeing it. But just as many jokes fall flat on their face as hit their mark. It can also be witty, but again, MacFarlane too often goes for the serrated edge of blunt offensiveness, rather than a more well rounded, well thought out jab.
Maybe I'm being too harsh though. After all, this is a movie about a stuffed teddy that smokes pot, drinks and hangs out with prostitutes. Its target audience probably doesn't want to have to detangle a clever joke about an overweight child when you can just go ahead and call him a fat ass.
Unfortunately, the poor creativity doesn't end with the jokes. The story itself is silly, cliched, cheesy and obvious. I'm not talking about the fact that it stars a talking bear. I'll buy into whatever movie universe I'm presented with as long as it backs it up with some substance.
Kids make wishes on shooting stars about their bears coming to life and it can come true in Ted's movie universe? Fine, I'll buy that. But now that you've got my attention, do something original and creative with the plot, rather than just banging on the same joke for almost two hours and taking all the same curves and highways a thousand raunchy rom-coms have taken before.

I will say one thing for Ted and MacFarlane's abilities, this movie has some fantastic visual stylings. From a seamless Forrest Gump-ish integration of Ted as a guest on an old episode of the Johnny Carson show, to a virtuoso opening shot that starts on the Universal logo and pushes past the letters, into the earth, and continues down until it finally rests on a house that young Johnny comes out of. Of course it was done with computers, but it's accomplished in a single shot and shows no evidence of how fake it actually is. Ted himself looks pretty believable, though there are many moments when his motion capture creation is obvious. Given that Ted is almost always interacting with real people though, sometimes in very physical ways, it's a good job overall. Speaking of Ted's fleshified counterparts, Mark Wahlberg is great and in some ways quite different than any performance he's given in the past, he's becoming a much more accomplished and versatile performer than I would've thought even five years ago. Mila Kunis is pretty bland though. She doesn't seem as into it as the rest of the cast and the charm and ease she showed in Forgetting Sarah Marshall is missing. I don't know if it was the material or something happening off screen I don't care to hear about, but I hope the fire and talent she showed in Black Swan returns to her for her next role.

Ted showed that Seth works best when he has hoops to jump through in order to attain his twisted vision, and while it has its share of funny moments and witty zingers, it's ultimately a very obvious and unimaginative tale. Again, the best advice I can give: Family Guy with more raunch but less wit. If that curls your toes, have a night out, it's on me (not the ticket or the snacks though).